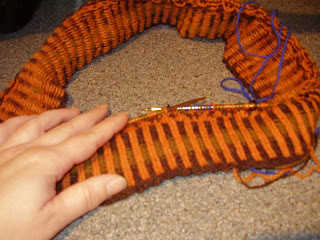 I've never been one to let something like a table full of WIP's get in the way of casting on something new. Especially when that something new is full of amazing colours meshing perfectly together.

Doesn't it just scream autumn?! Heh. I know the designer would love that description!

It's Lorraine's lovely vest design - "Windsor Waistcoat". And it's the perfect time of year to make this, I think. I'm making the XS size, but using a 3.25mm as opposed to the 3mm called for in the pattern. XS is a bit too snug, where as the Small size would be a bit too big for my liking, so by my calculations, going up a needle size should have it come out to exactly my size.

Thanks to everyone for your Laleli compliments! *blush* So, get this. I'm stopped at a red light, waiting to cross the street, when I see a woman on the other side of the street wearing this lovely cardigan (Ravelry link...).

"Hey! Nice Starmore sweater!", she says to me.

"Thanks! And I love your Philosopher's Wool Jacket!", I reply.

And this was said while crossing the street in the opposite direction from one and other.

So, what's scarier? That I recognized the Philosopher's Wool design? Or that she could recognize a Starmore design that quite frankly, is not one of VY's better pictures?

Of course, the fact that 2 knitters somehow know that it's cool to comment on a total stranger's outerwear without sounding loony is not scary at all. 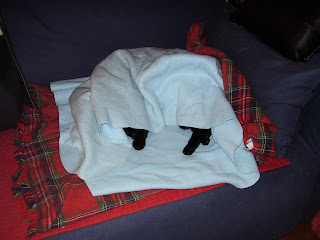 Speaking of loony... Gandalf LOVES burying himself underneath his blanket. After dinner, he'll stand on it, waiting for me to come over and fold the blanket on top of him. Then he goes to sleep, and is happy as a clam. 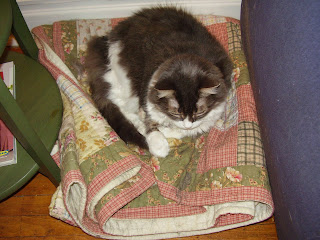 Mae has her ratty ol' comforter, which will not be shared with ANYONE. 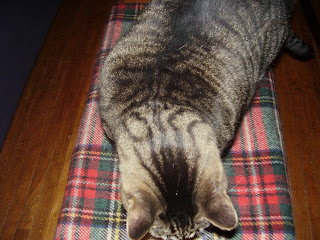 But Atticus knows to wait it out, because he gets the best spot of all, snuggled up next to me on the couch.

Oh! And yes, I'm feeling a whole lot better! Thanks to everyone for their good wishes.

When you're stuffed up, it's hard to pronounce.

But, that doesn't really matter, because I just need to see and touch this piece of loveliness to appreciate it. 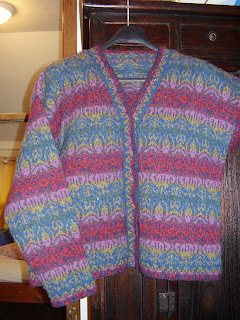 As stranded projects go, this was a fairly easy one. The pattern and charts were clearly written with no errors, and it all flowed nicely into place. The buttonband was a bit tedious at nearly 400 stitches, but ehn. What are you going to do. I really enjoyed this project, and what can I say? I loves her. She fits perfectly, and is comfy and warm. I think I may change the buttons though, they're a bit small. Which is a shame really, seeing how I only bought the same buttons twice, they were so perfect for this design.

Heh. Now it's on to finishing poor neglected Delores. Well, at least as for as colourwork goes. We shall not speak of the other poor, neglected projects...

So, I spent the better part of this week hacking and coughing and moaning. I came down with a cold late last week, the first one in a VERY long time. How long? Well, the only cold remedies I had in the apartment expired in 2005. Yup. I really shouldn't complain, but. I will. Damn cold. I'm still feeling kind of blah, but definitely better than I did earlier in the week.

I've said it before, and will say it again - not a good sick person. At. All. Sure, I may get some epic ear infections, but when it comes to colds, they are few and far between. And the flu? Knock wood - but I've never in my 40 years had the flu. Like I said - bum ears? I've got them. Colds and the flu? Knock me out and turn me into a snivelling, shuffling, snotty little child. Heck, I even fell asleep on the couch and missed Family Guy on Sunday night.

Now that is bad. 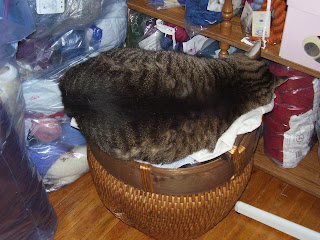 
Somewhere under all of that...cat is my sock yarn. Obviously makes a comfy sleeping spot. He arm wrestled Mae for this spot; she had dibs on it until Atticus decided he was bigger and well, bigger. 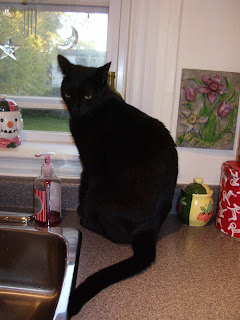 "Wha'...?! Honest, Big Guido started it! He's sitting on the back deck and flippin' me the bird! Mom! He thinks he's such a tough kitty... Why should I get off the counter?! He should be getting off the deck... Lucky for him I'm not an outdoor cat... Oh alright! I'm getting down!"

A very happy Thanksgiving to all my Canadian friends!