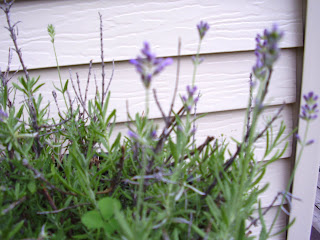 Let me be upfront. If you're hoping for some knitting content, well. You'll be disappointed. It hasn't been a knitting-heavy week. I can get pretty single-minded when it comes to organizing the new apartment, and once I've gotten everything just so, it's almost time to go to bed! All I can manage are a few sock rounds.
So single-minded in fact, that I didn't even photograph them!
If I ever thought that the guys would have any issues with being in a new place - well, those thoughts are out the window. 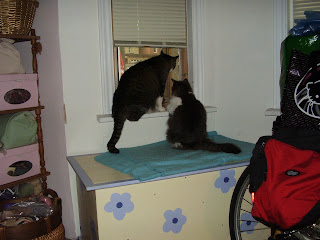 They continue to be enthralled by the wildlife. 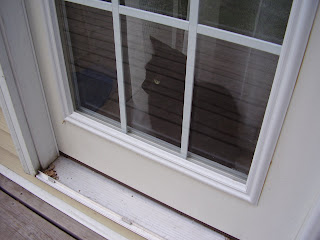 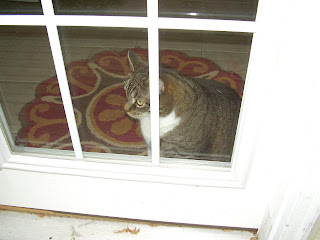 "Officer Atticus, at your service, Ma'am."

Atticus does indeed take his guard cat duties seriously. Anytime anyone comes to the back door, he meows up a storm (Lorraine, you know exactly what that's like!), and paces in front of the door. Anyone silly enough to say "aw, aren't you cuddly boy...", and reaches out to him will likely get his hand whacked. Scritchies are not permitted until Officer Atticus has sniffed you out first. If you pass muster, he'll then allow you to enter. And give him scritchies, of course. 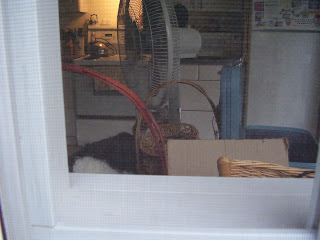 I have to say, ever since we've been down here, Gandalf has stayed off the counter. Probably because there is no view from there, the back doors are much more entertaining. Mae however, seems to like the table. I'm not too pleased about that, but then again Mae's pretty finicky, and she won't make a habit of it. Atticus hasn't figured out that he can jump on the chair to get to the table (a good thing), and Gandalf just uses it to get the window sill. Yet another view for him to watch the wildlife.


So, all is well in our world. I'm really happy at how it's all looking!

Except for *one* very annoying, very untimely, and very, very stinky snag. City of Toronto civic workers have decided that this would be an AWESOME time to go on strike. It affects all sorts of things - one of the biggest being garbage and recycling pickup. See, as I was packing to move down here, I said to myself - "self, don't bother going through everything now, just wait 'til you're downstairs, and you can get rid of stuff then.". Smooth move. Now I have 3 discarded pieces of furniture, and old futon mattress, and about 3 garbage bags to throw out. Not to mention the Little Dudes...unmentionables... which are quadruple bagged and out on the deck. The recycling can go in the containers outside, that's no problem. And I can take my Green Bin stuff and dump it in our composter in the backyard. It's all the other stuff that's proving to be a problem. There is a "temporary" garbage drop off not too far from here, but I really don't want to have to cart the garbage there. I don't want to add to the mess if I can help it. My landlady said they will cart away the furniture and mattress to the landfill themselves, so I don't need to worry about that.


Anyway. It could be worse, right? I could have kids in a City of Toronto-run daycare, and have no other options. 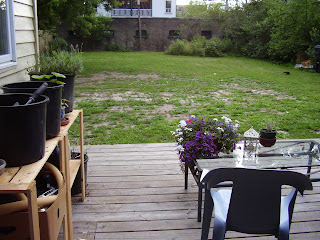 My little corner of the world...

Have a great week everyone! And next week - knitting! Really!

Wow, it's been awhile! I hadn't realized it's been 3 weeks since my last post.
We've been busy. Kind of. Moving, you know... 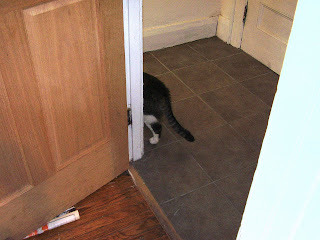 I would leave both doors open - the one from the old place, and the door to this new place - to see if the guys would wander down while I worked and moved stuff.

Atticus was tentative at first, but the bravest of the bunch.

As more and more things were moved down, they became a bit more curious.

Did I not say I would never, ever move apartments on my own again? Didn't I say that when I started looking into moving earlier this year?? Aren't I a fool. Well, I did have people help with the big things - but I moved 75% of my stuff by my stubborn self. Now I'm scratched, bruised, I dropped my upright vaccum on my toe, hit my head in the same place twice and my knees are swollen from going up and down stairs a gazillion times. But, I have pretty much everything moved out, save for a few bits.

Now, things are falling into place. The guys are perfectly comfortable in their new home. 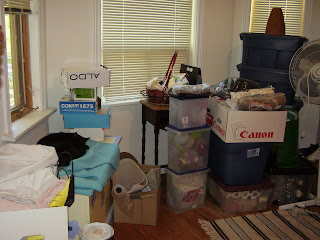 Gandalf has his spot. 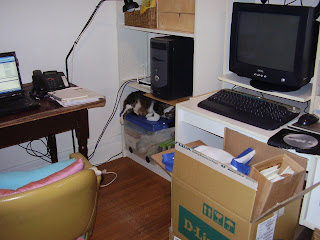 Atticus still manages to find the most bizarre spot to get comfortable. 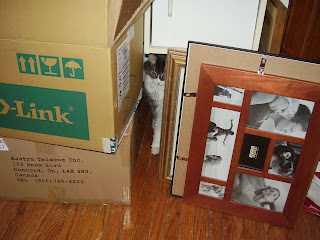 And Mae explores her new surroundings. 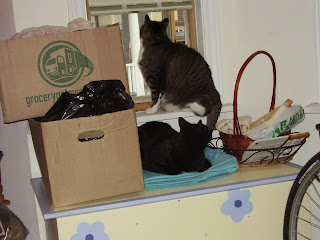 "Wow Gandalf, this place ROCKS! We're like, really close to the ground now!"

"Can you see Guido? Is he still coming 'round?"

"Yeah! He's across the street, and I can see him! Wow, he's a big cat Gandalf... Um, we may want to rethink our plan of psychological warfare against him..." 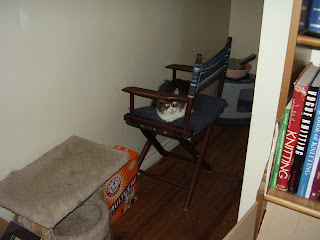 "Did you tell people how your knitting stuff was the first to get moved downstairs to the new place?" 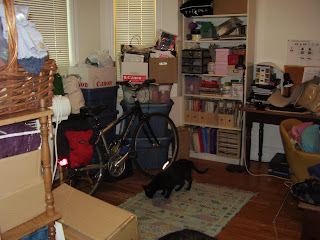 Although still a little messy. It all has a home.

See, throwing stuff in boxes and bags however they may fall may sound like a good idea at the time, but it does tend to make unpacking a bit...disorganized.

But, every day it looks a bit better. 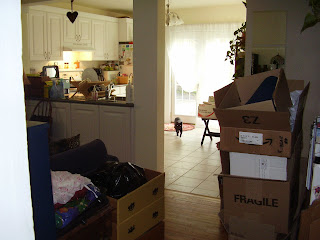 "Here I come! I love all the space I have run around in at TOP SPEED in! Wheeeeeeeeeee!"

So, what can I say? All is well with the world. Um, make that their world. Happy cats, happy home! 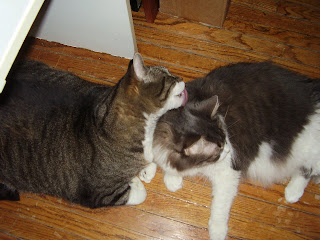 And you know what else was going on here? In between all of the "packing" and moving and work - I paid a little someone a visit. 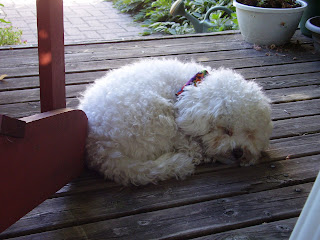 Finnegan! I went to visit him and his Moms last week. For a bittersweet visit... See, my sister and sister-in-law are packing up and leaving St. Catharines for Nova Scotia! Which is an excellent thing - my sister-in-law has a great new job at the IWK Hospital in Halifax. They have plans to build a new home outside of Halifax.

I went out for a last visit at their home in St. Catharines before they leave at the end of July. It was a great home, and I'll always have good memories of St. Catharines because of them. And Finnegan too, of course. I always felt so at home when I visited them - I was always welcome, and ALWAYS had a great time. Not to mention always well fed too! So, even though it's sad to see them go, I know that there will be a lot of good memories to be made in Nova Scotia, once I started visiting them when they're settled.

And I still have a lot of stuff to do here to keep me busy for awhile.

I want to also thank everyone for the well-wishes! Yup, it was a doozy of an infection alright. I have my (hopefully) last appointment tomorrow with my doctor to make sure it has completely cleared out of my system. I'm pretty sure the eardrum has healed on it's own (Debby, a perforated eardrum does heal on it's own, and pretty quickly too!), finally.

You know, it's been a busy year up to now, and I'm really hoping that I have a bit of calm and quiet for the next little while. And knitting. I haven't knit too much these last few weeks! Except socks, and few other stealth items.

Back to the business of unpacking!