Shhhh... Listen... Do you hear that?
Listen closely. What do you hear??
Nothing?? Well, then you're hearing the same thing as I am!

Nothing but quiet. Know why? THEY'RE GONE. My neighbour downstairs and her twerpy boyfriend have left the building.

And now, a moment of silence. NO WAY! *jumping up and down on the floors*

And not a moment too soon either. Because things would have just gone further downhill from here on, if that's at all possible. See. It turns out that there will be a Junior McBickerson some time early in the 2010. Yup. To be honest, if she's on her own, I don't doubt she'd be a good mother. However Twerp-Boy? Less than stellar. Much, much less. The plan now is to save up for a place together. She's living at her mother's, and he's...wherever. Eventually, they'll move back in together. I can see the COPS footage now. Nice.

I'm just happy I now have her apartment!

But. Let me tell you, I got precious little done this past week. Not a thing, as a matter of a fact.

See, what I *thought* was buildup in my right ear turned out to be something worse. Much worse. So bad in fact I landed in the hospital, with IV antibiotics; and not the least bit ashamed of crying and blubbering in front of total strangers. Seems the "blockage" was an infection that perforated my ear drum, and found a nice, sore spot to eat away at my eustachian tube, and enter the surrounding tissue, infecting the right side of my face, and getting into my bloodstream.

With the right side of my face swollen to the point you could not tell where my cheek ended and my outer ear started (and the ear swollen shut), I went to the ER, and was admitted. I was hooked up to some heavy duty antibiotics, and given some pain medication.

Anyway - all that to say, it was a rough week. I have another check up with the specialist on Tuesday (the 3rd since I was released), and more bloodwork to check the level of infection in my bloodstream, but things are sooo much better now. The swelling is gone from my face and ear, and the ear infection is on the mend, although it's still "there". I still have a few more days of oral antibiotics, and a week + of the drops.

Once home though, I was lucky to have some Home Care.

Nurse Atticus followed me around until I was either in bed, or on the couch. He then proceeded to plop down next to me, making sure I couldn't move without him knowing about it. 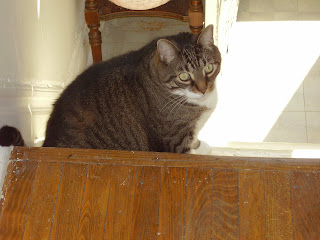 "I don't do bed pans or clean up barf. Just so you know."

Head Nurse Mae made sure that I took my medications, and drank my Ensure drink. My jaw was too sore to chew. 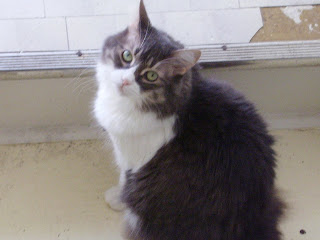 "Don't make me come up there."

And "Wants-To-Be-A-Therapy-Dog" Gandalf made sure that I smiled as often as I could. 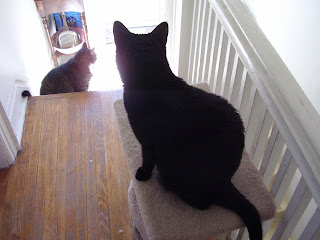 "Hee hee! I really think I'd rock the hospital."

What more could you ask for?

And don't think I haven't been knitting through all of this. OK, maybe not so much last week, but I have been concentrating on getting some long suffering WIP's done. 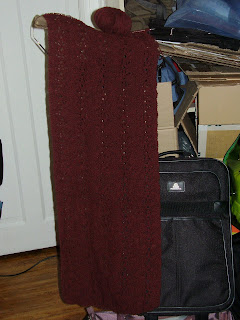 Not that you can tell, but this is my Birdsfoot Scarf, from Virtual Yarns (Red Rattle doesn't photograph particularly well). If you enlarge the picture, you'll get a better idea of the stitch repeat. Really very soothing to work on - which I can appreciate these days.

I really don't have the attention span to work on much more than that. For one, the medication I'm taking for my ear makes me soooooo...tired... Plus, there's the little thing I'm doing called MOVING. Of which I've done precious little packing to prepare. Good thing I have a few weeks to move in...

Soon we'll be downstairs in the bigger apartment, with a huge, bright kitchen that I'm pretty sure will please the sun worshippers that are the Little Dudes. 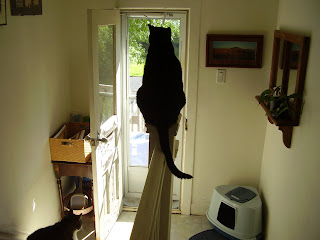 "What do you mean, I won't be able to sit on the bannister post and harass squirrels any longer??"

What can you expect? The apartment is a mess, stuff is all over the place, and when things look neater when they're packed - you can guess what I'm spending my time doing.

I am still very much smitten with Isobel of Mar. Although...we had a bit of an accident. OK, not really an "accident", maybe more of a difference of opinions. You see, I thought she should take a longer bath than she actually needed. She was offended by this, and decided to show me the error of my ways by drying out LARGER than she should be. So large in fact, she came down to my knees. Now, I had always planned on her being an outdoor sweater. But this was crazy... Not to worry though! Lorraine to the rescue! She came over for a visit this past Friday, and took Isobel home with her. She'll pop her in her washing machine, spin out all the excess water (which is what I didn't do), and block her to size.

(Yet another reason why I really, really need/want my own washer/dryer.)

Other than that... I haven't been knitting anything too exciting. Well, at least at the point they are at now. Finishing up things, working on socks...that's about it for the next little while. I won't be starting anything new, so this move is a blessing in disguise for my poor, sad, neglected WIP's...

Last weekend, I was going to pop outside to check out a throw rug I had drying out there. I didn't get very far. 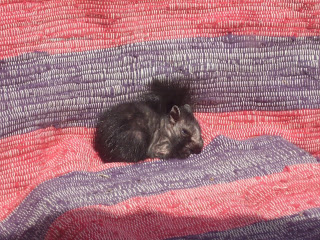 The rug was...occupied... by this little fellow. 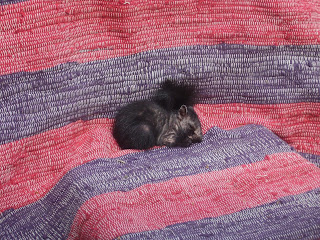 He would have fit in the palm of my hand. He was sleeping away in the sunshine. And you know? Baby squirrels sleep very much like baby kittens. 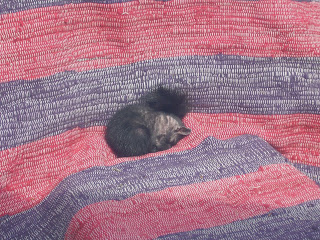 In a little round ball, with their heads tucked in; at one point I looked out, and he was on his back, feet up in the air. Such a sweet little scene!

I was a little concerned that he may be lost or abandoned, but I saw him running about the back yard later that evening, and I've seen him since. Probably got in a whack of trouble for coming home late though... 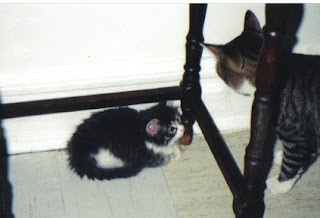 "Hi. I'm your little sister Mae. I bet you're just the smartest and bravest big brother ever! And wow, are you ever buff! You must really watch what you eat and lead a clean life!"

Baby Mae turned 10 years old! My little girl... Hard to believe she was ever so tiny, but she was. And she was always a sweetie pie, right from the start. (Also, hard to believe Atticus was ever so...svelte. His head looks strangely large for his body in this picture.) 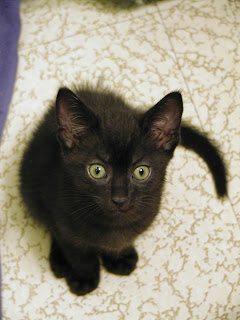 Baby Gandalf turned 3 years old last week! Wow! Hard to believe. If it weren't for his size now, you'd swear he was still a kitten. Aw, even as a baby he had big feet and a boop-able nose. Hee hee.

Not to be outdone by all these baby pictures - "Once the kids arrived, my waistline went to pot. What can I say."

Hard to believe that despite this: 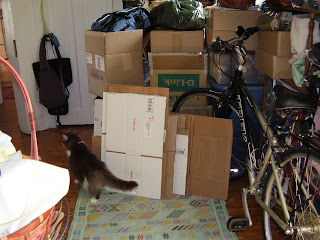 I was able to do this: 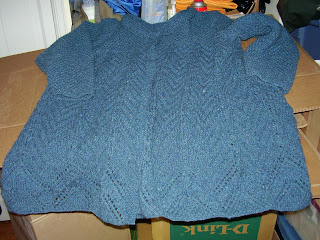 Finish Isobel of Mar. Yay me! OK, to be truthful - I still have to block her, and sew on the buttons, but despite that - she is finished. And guess what? All those worries I had about it maybe being too small? For nothing. She fits perfectly. And long enough that I can pass her off as a coat, and not worry about looking tubby in it. I loves her.

For those of you who are wondering - Isobel of Mar is the adult version of "Secret Garden" from the Starmore book "The Children's Collection". I knit her using Hebridean 3-ply in the "Summertide" shade. The colour is much more vibrant that it appears in the picture - it's a beautiful shade of blue, with flecks of green and gold. And it's just the right shade to perfectly show off the little details this coat has. Although - if you're not a big "finisher", this may be a bit much as the buttonbands and the collar are added separately, which in itself is not a big deal, but the execution of the collar at least is probably a bit more involved. But the results are worth it. So happy! Thanks to Marina for discovering this gem, and putting the bug in my ear to make it as well.

So, as I mentioned - that I was able to concentrate long enough to finish it up is pretty amazing. It's been rather hectic around here: work and the never-ending mega-project; a crappy bout of shingles that just had to rear it's head NOW; my upcoming move downstairs and the clutter of my apartment now (and clutter in my own home makes me cuckoo); and of course, listeing to the Bickersons downstairs yell and scream at each other... Just a few more weeks, I tell myself. Just a few more weeks...

I picked this up yesterday for the guys, mainly because I thought the name was hilarious: 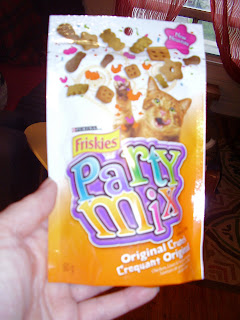 Party Mix for Cats. You can't tell, but the expression on the cat's face on the bag makes him look like he's on speed or something. Despite being the ultimate in kitty junk food, I decided to pick some up to liven up the Little Dudes Cocktail Hour of 9pm. 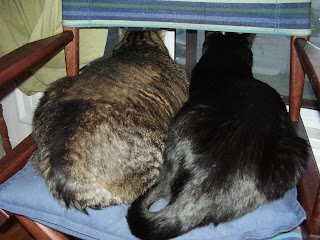 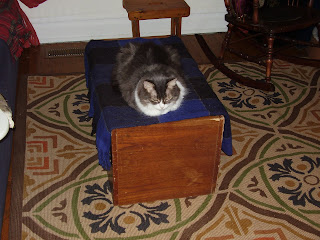 (Hopefully you remember your SNL from the early 90's...)

OK. Time to hit the laundrymat. I really let it go way too long this time. You know, when it comes to my home, I have two wishes. One - a cleaning lady. And two - my own washer/dryer. One day...

I leave you with this little gem I snapped this past week. 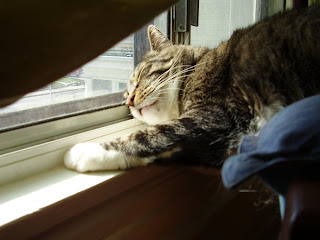 I have to wonder how comfortable it can be to sleep with your head on the window sill, but, he looks pretty content in his sunbeam!

Hey! And to all of my mom friends - Happy Mother's Day!