Before I took Malcolm in to the vet because of his vomiting, I really had no indication he was sick. Or did I...? Now that I think back, he thought he was a pretty calm kitten.

In the last week or so, he's been on a path to recovery, AND discovery.

I walked into the kitchen last week, and I *thought* I saw from the corner of my eye, a little orange blur jump off of the kitchen counter. But, I wasn't sure, and didn't pay much attention to it. 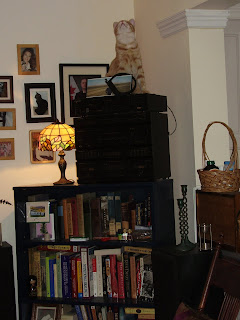 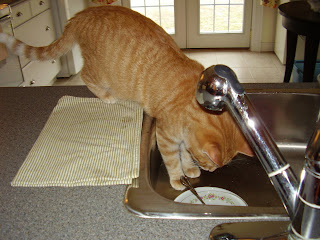 "Just a quick jump from the top of the stereo, to the counter, and here I am! At the sink, and oooo! I bet if I knock this fork around the sink it'll be really annoying! Yay!"
Not Atticus, not Mae, and not even goofball Gandalf ever jumped and climbed like this guy can. 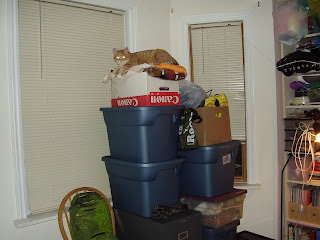 "I'm a Mountain Lion! Aren't I fierce?!"
He gets into EVERYTHING that he shouldn't. 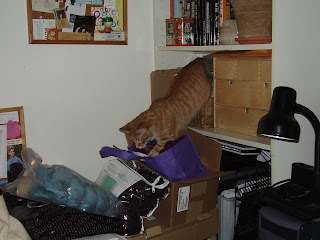 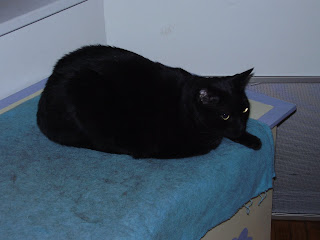 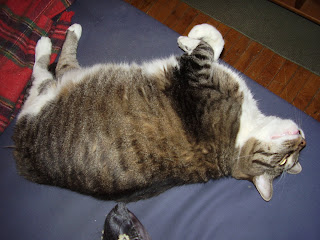 "I just can't keep up with him. Hey...I wonder if I could jump up there...?"
See the Mountain Lion at rest, his prey discarded. 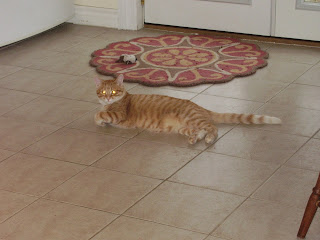 And let's watch him as he approaches the watering hole. 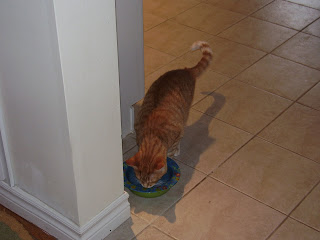 "Enough with the lame and annoying commentary. Sheesh..."
He did stop long enough to wish his big sister Mae a happy 11th birthday on March 24th. 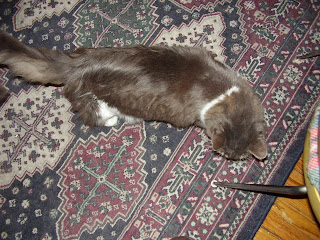 "Oh. He's still here. Didn't get my wish."
I still remember Mae's first day here. She jumped on my shoulder while I was sitting down by crawling on my back. And she bonded with Atticus almost immediately, and he is still the only cat in the house she'll differ to. She was just the sweetest little fluff ball. And she still is! Happy Birthday, Baby Mae! 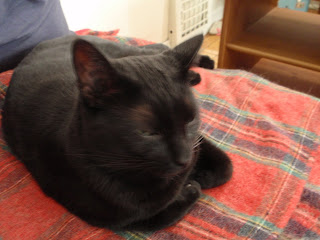 "What?? She never bonded with me like that! Well, at least not right away. Fine then."
So. What else besides Malcolm doing taibo?

Well... I was kind of hesitant to mention this. But, seeing how I'm fine - I will.

I was coming home from work last week, and I got dinged by a car walking through the intersection. Nothing major, just enough to knock me over. I was crossing on a green light, and a lady made a right in front of me, and didn't stop. Oh! Did I mention she was on her cellphone?? Once she saw me, it was too late, and she didn't put on her brakes quickly enough. So, she hit me. Luckily, I fell on my butt, leaning towards my left side. I didn't hit my head, and right now I'm bruised (am I!) and very, very sore. And feeling better today than yesterday. My friend Dave came over yesterday, and helped me with my shopping. It took less than 2 hours, and tired me out for the rest of the day!

As this was rush hour, and at a modestly busy intersection in my neighbourhood, there were a lot of witnesses, including a streetcar full of people, cars waiting at the light, and another person crossing the street behind me. It's not like she could deny it. I was really quite gratifying to see how many people came out to help me, including the streetcar driver. The police arrived, and she was very cooperative with them and me, and didn't deny anything.

Oh! I just realized I didn't take any knitting pictures. Not that I have a whole lot to show for myself.

Labels: Little Dudes, Malcolm, My House, This and That, Weird Stuff

I've decided I need a break. From Sapporo, that is. Although I don't think I'll end up quite as nauseated with my Dale as Lorraine was with hers, I do feel that if I don't take a break from Sapporo, I will end up beating myself about the head.

I'm not sure why. And no, this doesn't apply to Princess Line. It'll just take me...longer...to finish it up.

So, in need of something to keep me interested, and that will not keep me glued to a chart, I decided to give in, and start working on something new. 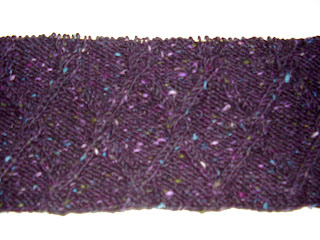 ...of a very lovely "Dorset Down". This is Lorraine's latest Twisted Traditions offering (although I don't see it up on her site)! I'm using Kilcarra of Donegal "Aran Tweed" in Purple. It doesn't look like much now, but it will. It's a thoroughly enjoyable pattern, and just what I need right now. Maximum results with minimum effort! 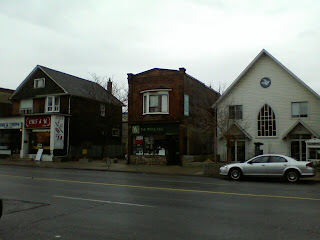 How long have I lived in this neighbourhood?? 12 years. And you know what? I never noticed (EVER) the shop in the middle in the picture above (that's from my camera phone, not bad...). Anyway. I was walking to the vet's office to pick up some meds for Malcolm (more on that later), in what had to be the worst weather so far this year (for me anyway - wind, cold and rain all mixed together. Fun!), when I happened to glance across the street. It's a yarn shop. Yes. A yarn shop. In my area. That I didn't know about - "The Wool Mill". And it's probably closer to me than "The Naked Sheep" is. Now, I don't think it's new, looked pretty established to me. But, how I didn't know it was there until now is beyond me. *hanging head in shame*

I didn't stop in because it was still early and closed. And the weather SUCKED. Walking home from the vet's office, I was walking into the wind, I was wet, cold, pissed off, and I had to pee. Therefore, I wasn't about to cross a busy street to find out it was still closed. Besides, I didn't have enough money on me. And usually "browsing" and "yarn shop" don't go together.

OK. So, the reason I was out on such an icky day. 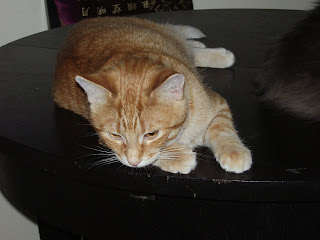 "Geez, I'm really getting to know everyone at the vet's office by first name..."
Well, I probably wouldn't have ventured out otherwise.

I took Malcolm into the vet's office last week, because he'd been vomiting. Not such a big deal with cats normally, but he would vomit not once, but several times in a row. And it wasn't caused by hairballs either. It had happened before, and he had been sick 8 times in one evening. So, I packed him into the carrier, and had him checked out. The took some blood, amongst other things, and it came back that his white blood cell count was twice what it should be. They prescribed some antibiotics for him, so off I went to pick it up. It's in liquid form, and he's had 3 doses already. As have Atticus and Gandalf. I'm not sure how much is getting into him. I picked up some cat milk, so hopefully he'll take it that way, without getting too distracted by lint or poop.

You wouldn't know he was sick though. He's his usual kitten self - giving Gandalf his regular morning/afternoon/evening smack down, power-napping, and whining for his mid-morning snack. 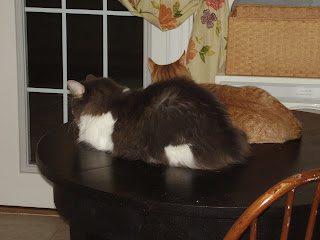 "...he never shuts up..."
It's been another one of those weeks at the gulag...I mean work. Whoops. I don't know what it is, but everyone seems to believe that their project is the most important one EVER EVER EVER! And they want it NOW NOW NOW! And it's not just me; there are 3 of us in my work group, and we're all working on saving the world as the Project Managers we're working with believe they are doing.

OK, I need some distraction.

Bridget tagged me! So here goes: 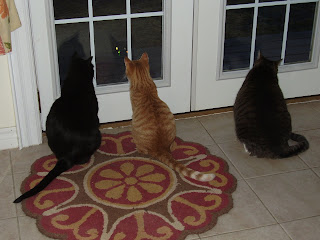