Wow Kids, what day is it?! I myself am not sure... I've just come off working 17 hours of overtime this weekend, 11 of which happened between 11pm on Saturday and 10am on Sunday morning.
Long. Long. Weekend. And not of the good kind either. *sigh* I had high hopes of knitting a stitch or two in between testing the changes and other such delights, but no such luck. Funny what lack of sleep and headset pasted to your head can do to a person...
I don't handle lack of sleep well. Even though I had a snooze after the implementation yesterday morning, I still feel blah. And as though I've been hit over the head with a stupid stick. Oh well... I guess work does keep me in yarn... And other necessities like food and lodging. Heh.
The guys kept me company. A bit thrown off their schedules, but there nonetheless.
Mae would pop her head in the room once in a while, to make sure I remembered she existed. She was the only one who decided that while it was nice Mom was up and all, she'd be fine in her comfy spot, thank you very much. 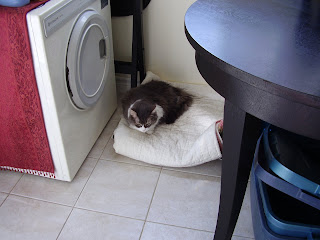 "It's not that I'm indifferent to fatigue. I just don't get why anyone would resist it."

You know, that old... whatever it is... she's resting on? Destined for the garbage once the strike is over. I put it there temporarily while I wait out the garbage strike. Meanwhile, she's grown attached to it...
The boys of course, stuck to me like white on rice. They thought it was awfully cool that I would speak into this funny neat-o toy attached to my head. They tried to talk into it a few times too, at least so they could see what the big deal was all about. When they decided it was kind of lame, they tried to chomp on the microphone. OK. Only Gandalf did. Duh.

Today, all is (somewhat) back to normal...

They lounge in the sun... 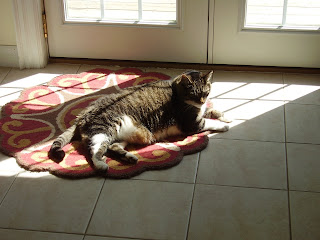 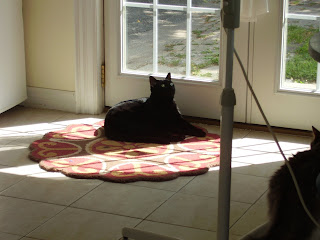 Gandalf also posed for pictures. And he was kind enough to sit still. 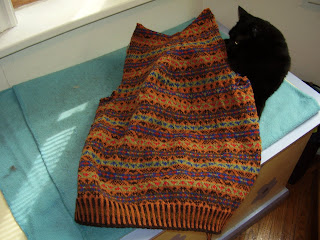 I had hoped that I would have had the steeks cut, and the arm and V-neck bands completed and a finished Windsor Waistcoat to show off...but. As you can see.

(I really must be tired, I suddenly had a vision of Gandalf in a dapper Fair Isle vest! Hee hee...)

Nevertheless - the body is done, shoulders are grafted, and what the hell, I may even cut open the v-neck tonight. Maybe. I'm still a little tired... *yawn*.

I know it's summer, but so far, I haven't had much of a chance to enjoy it. This weekend - I really want to get out on my bike and ENJOY some of it. Provided the weather holds up. Although you know? Unless it rains, I'll probably got out for a ride anyway.

Well, the worst of this mega-huge honkin' project at work is over, just some clean-up stuff left to do. And it's history! I just hope I won't be too tired from it all to savour the end of it.

Have a WONDERFUL week everyone! 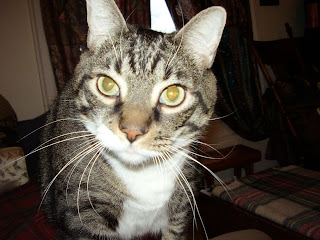 "You listening?? Have a good week, dammit!"

Oh, it's certainly nice to get back to a routine. Change is always good (in this case - moving). But when it comes to a girl and her knitting, it really is nice to be back in business.
Yesterday, I picked up my Windsor Waistcoat, and couldn't believe I'd been away for so long! I missed my Fair Isle... (Those of you who have not yet joined the FI fold will probably shake your head. But worry not. We will bring you over. Oh yes. We will.) *sigh* It was so wonderful...
And! You know what I managed to do this past week? I actually finished something!
Now, this picture is a bit of a tease. In that you can't tell much from looking at it. I wasn't going to post it, because it is a stealth project. But, I decided to anyway because you can't tell a thing from looking at it. When I get it nicely blocked and figure out how to photograph deep red, I'll post it in Ravelry.
In the meantime... 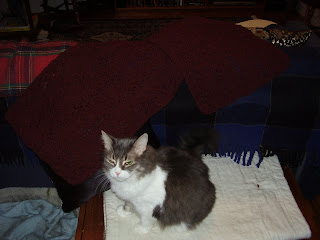 I also have another stealth project going on! But - there will be no tease pictures. Instead - have a peek at my project page in Ravelry... All the sneaky details are there. But shhhhh! It is to be a surprise!

Instead, I'll show you a gratuitous picture of a Baby Atticus. 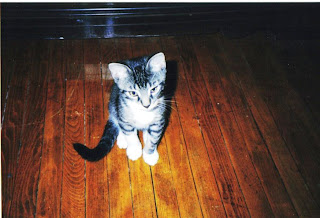 Hard to believe this is the same little baby Atticus!

Back in the present... 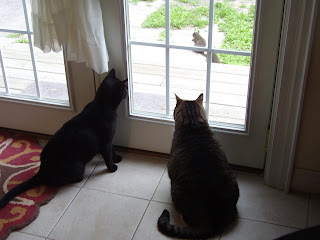 "Gandalf, what are we going to do with the squirrel if we actually manage to catch it? I mean, seriously."

What you can't get from this picture is Gandalf's tail swishing back and forth, as he tries to fit into the role of Tough Dude.

It must be a boy thing. Because Mae? Could not care less. 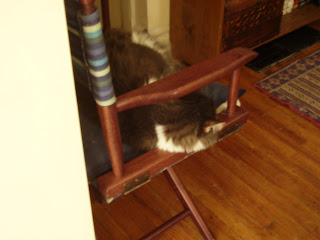 "I save up my energy to hunt for real prey, should the need arise. Boys are so dumb."
Mae has always been the "huntress". In the 11 years I've lived at this address, she has caught 2 mice. Not bad for a house built in the 1890's, with the original basement still unfinished in places.

As for the rest of the week that was... I officially finished unpacking all of my stuff. I do have 2 more pieces of furniture on the way, stuff my sister and SIL are giving to me before their move.

My intention is still to NOT dispose of my garbage in the temporary dumpsites opened by the City of Toronto for the duration of the city workers strike. And, after I saw how much has been piled up already...forget it. I will wait it out. I am not contributing to THAT mess. Oy... So, I'm being extra vigilant with what I do throw out. Good habits to keep for the long run, I guess.

Hey! I wonder what knitting surprises are in store for next week...?!!?