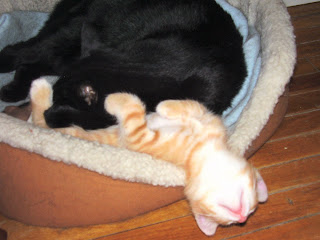 It didn't take long for Malcolm to find a surrogate Kitty Mom. Gandalf stepped in to the role rather quickly. Cleaning him, sleeping next to him, making sure he's ok when he starts whimpering, playing with him...sometimes a bit too roughly, but hey. Malcolm is made of rubber. Can you tell?! He's also carried him around by the scruff of the neck as well. Funny how these instincts rise to the surface in adult (even male?) cats. I never thought I'd see the day when Gandalf would be such a soft touch.


However, it took a few more days for the others to come around.

First was Gandalf, within 24 hours. 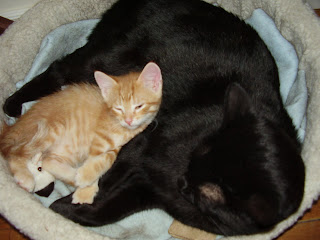 "I love you Big Brother! You're awesome!"

Gandalf has the most patience with him, pretty much allowing Malcolm to do anything. But, when it comes to teaching the little grasshopper some manners, he can be a bit forceful. After a few days of breaking them up, Chris and I realized one thing - Malcolm is a bit of a Drama Queen. And most times, he initiates the wrestling matches. Gandalf is not hurting him, he's just teaching him how to behave. Malcolm? Hasn't quite caught on yet, at least when he's with Gandalf.

Then Atticus came around. I woke up one night to find Malcolm sleeping next to Atticus.

Atticus hotly denied this. But, I caught this moment. 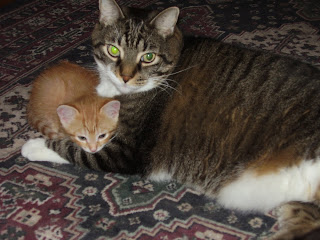 "I love you Really Really Big Brother! You're awesome!"

Atticus will put up with Malcolm only so long. Which is no different from the other cats and people in his life. It's funny watching him trying to clean Malcolm - while Gandalf will physically hold him down to clean him, Atticus will try to get in in between Malcolm squirms. It's so funny watching his head bob up and down trying to get a clean in. He'll play with him as well, but when he's had enough, he's had ENOUGH. Malcolm is slowly getting that message, heh. 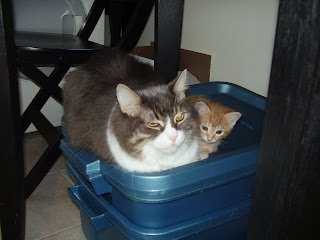 "I love you Big Sister! You're awesome!"

She's come around, although very much on her own terms. He can sleep next to her, but there will be NO playing, NO wrestling, and NO cleaning. And he'd better not swat at her tail. She's a stern one, that Mae. But, Malcolm seems to have gotten that message, and goes to her for a nap cuddle.

So, peace reigns amongst the clan. I knew they'd be fine together, I just didn't expect it so quickly. And I certainly didn't expect Gandalf to find his inner Queen Cat, and become so motherly towards Malcolm. The boy has a good appetite, and his older siblings have taught him how to whine at just the right times for food. Mealtimes can be a bit of a challenge - keeping him out of their food, and them out of his kitten food. It's getting there.

Chris was here visiting from Minneapolis, MN for awhile, and the Little Dudes were most impressed. Two humans dishing out pets and compliments? Doesn't get better than that! And, she came bearing gifts! 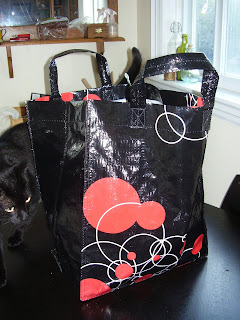 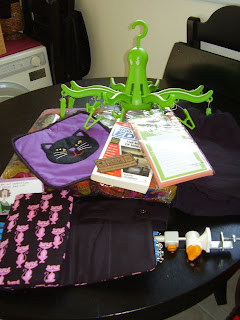 For me! All sorts of stuff, some of which isn't even in the picture. There's a circular needle case, some notepaper, a book on Minnesota lore, some Noro Kureyon yarn for my Lizard Ridge blanket, some black kitty pot holders (LOL!), and a Socktopus from IKEA (the ones I've seen here aren't as funky). She also had a second swift lying around at home that she gave to me - something I don't have. And some gluten-free pretzels, pasta, and the entire line of Betty Crocker gluten-free baking mixes, which are not yet available in Canada. And I'm sure I'm forgetting stuff too. There was a LOT of stuff in that bag. And of course, toys for the kitties, which are now *somewhere* in the apartment.

She's back home now, much to the relief of Chaos and Mayhem. Apparently the smell of the Little Dudes didn't linger too much, and they seem unaware of time she spent in the company of other kitties... We had such a great time together, and the time zipped by so quickly! I knew we'd get along great, and we did.

We all miss you Chris! Come back again soon!

Oh! And in case you're wondering - yes, there has been knitting.

I finished a few things, probably not what you'd think though. I started making a pair of baby socks for a friend of mine who's wife just had another baby.

How CUTE are these?!! 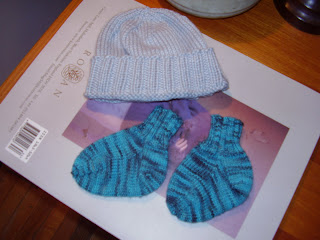 And I also made a little hat as well. I think I may even have enough to make a little pair of mittens. The yarn I used to for the socks was left over from a pair I was making for myself. I started making them before I moved, and then forgot about them.

I've often been laughed at for having small feet (size 6.5). 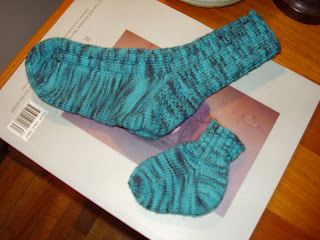 Heh. Chris was here when I completed the pair. She saw for herself that they fit. :) The ones on the top, of course! 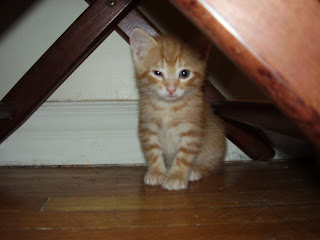 "Hi! I'm Malcolm! I'm new here. I'm still a bit confused, wondering why everyone is fussing over me. The big kitties hiss at me sometimes! But, they're being nicer this morning. At least Atticus isn't trying to whack me in the head." 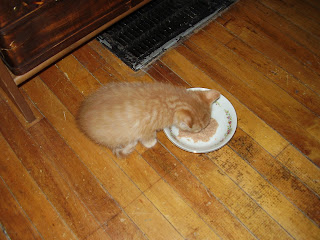 "I get to eat off the fancy dishes too. I have to watch out for my big brothers though, especially Atticus. He's always trying to eat my food. Boy, is he ever big!"

There's a new little addition to the family! Meet wee little Malcolm - 6.5 weeks old. He was born to a feral Mom who "moved in" to my landlady's home. He's just the cutest, squeekiest little guy, with a lot of spunk and bravery. He's standing up to Atticus and Gandalf's hisses and is already exploring everywhere he can. A little love muffin too - loves his scritches and belly rubs. I woke up this morning to him nestled next to me under the covers. Awww!

The Little Dudes - well, they were a little confused a first, but they seem a bit more accepting this morning. 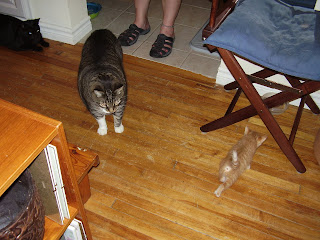 "There's a strange lady visiting. That's cool... But then this squeeky thing that keeps moving around showed up, and he's still HERE. What's going on?!!"

"That strange lady is Auntie Chris - Chaos and Mayhem's Mom, Atticus. And I keep hearing them refer to that squeeky thing as "Malcolm". And that he's our new brother..."

Yes - we have a visitor from Minnesota - Chris is here visiting with us. The guys are now pretty pleased with all the extra attention they're getting - Mae can't get enough of being told what a pretty girl she is. She's actually posing for pictures. 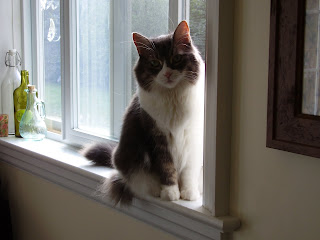 "Yes, I'm lovely. We know that. But I still don't know what that little orange thing is still doing here... Really." 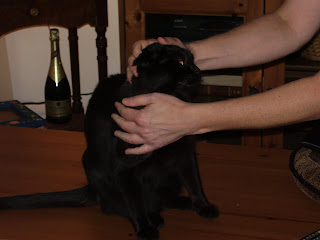 "No Auntie Chris! I don't wanna play nice with Malcolm!"
Today though, we've made progress. 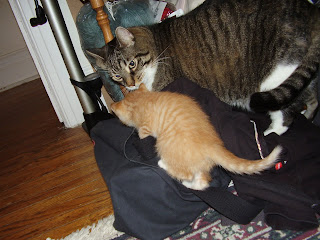 "Hi Big Kitty!"
"OK, so you've shown that you can crawl under small spaces, and find our lost toys. You may be OK after all."
After a period of adjustment, they seem to be OK with Malcolm. Gandalf still hisses, especially when Malcolm tries to go after his tail, but he was sniffing his ears and head this morning, without being melodramatic about it. Mae is the only one that's indifferent. When Gandalf arrived, it took her a few days to want to even go near him. With Malcolm, she'll get close, and even let him get close, but he'd better not try to play with her tail! Atticus actually woke me up in the middle of the night to let me know that the squeeky orange thing was awake and moving around.
There will be knitting pictures - but today, it's all about Malcolm. 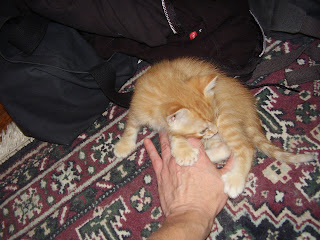