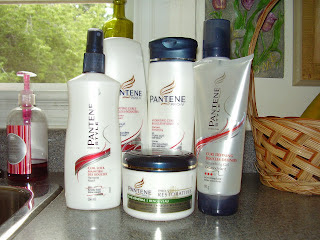 Go ahead. Ask me why I have pictures of hair stuff (as opposed to knitting stuff...).
1. I have nothing to show that is remotely interesting. Just progress on...stuff. You know. Long suffering WIPs.
I had planned on a showing you something new, but it hasn't arrived yet. (Oh wait, I do have sock stuff...wait for it.)
2. I'm pretty pleased with it.
Well, I actually won this stuff! Cool! I submitted a hair question (duh) to a magazine, and they chose my question as the "Question of the Month". It had something to do with long curly hair in the summer going haywire. And, I won all the stuff they recommended in the answer they provided.
Winning stuff? I could get used to it. 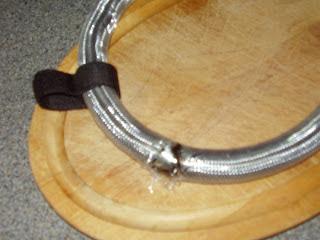 (Pardon the blurry picture.)
And here's another non-knitting related picture. Just to make sure no one mistook it for a snake (gross gross gross), I made sure to include the velcro attachment. Wondering what it is?
It's the lock from my bike. It may have cost close to $50, and it may be a bit heavier than most, but it probably prevented my bike from being stolen this past Saturday. I had stopped into the grocery store, and because the store (for some INSANE reason) got rid of their bike racks, I was forced to lock my bike to a metal bench in the front of the store. The front. In between two entrances. High traffic. At 9:30 in the morning.
I was in the store no more than 15 minutes, and when I came back, this is was what I saw. I'm just glad they didn't manage to cut through the cable. They just managed to dent the lock...
This is similar to the lock I have - http://www.cyclepath.ca/products/item495.htm., one that I will be purchasing again.
*sigh*
And other than that, it's been fairly quiet here. 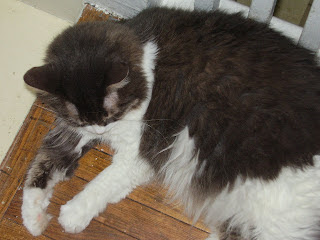 Mae is just plain pooped after a Sunday watching the "Mad Men" marathon with Mom. 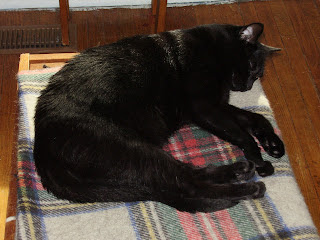 Gandalf is also just plain pooped after a Sunday watching the "Mad Men" marathon with Mom. 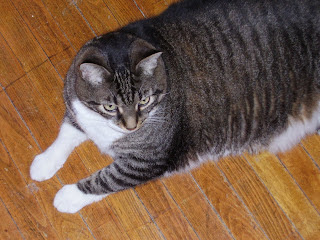 Atticus is just plain pooped of the rain on Sunday, and didn't see most of the "Mad Men" marathon. He was hiding from the rain most of the day.
Kind of like when Chris went through her "24" phase. 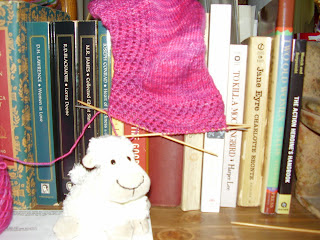 So, do these look weird? I think I'm going to have to rip them down to the ankle and start over with fewer stitches. It's really looking pretty big already, and the lace will only stretch out further. And I have small feet and bones, so this will sag considerably.
Lately, my sock skills have been less than...well, just less. :D
Oh! And I also wanted to mention!
Thanks to everyone who weighed in on Columbia's dye issue. I think I will leave it as is. Once I have it on outdoors, with a scarf and mitts and other fall/winter stuff, the colour difference will hopefully fade into the background. Anne from She Ewe Knits contacted Jamieson's for me to let them know about the problem, and they will be sending me another skein of the Traditional Aran. Actually, they were going to send me a skein of whatever I wanted, but this fit the bill for me. Good customer service is always a good thing in my books, and I'm pleased at how this turned out. Thanks Anne!
Posted by Brigitte at 2:38 PM

Oh, I do love to win stuff, it's always fun, 'cause it usually means a package in the mail, one of my favorite things.

I do like the yarn for the socks, even if you have to start over ...

Hope the sock decides to behave!

Oh! what a shame to rip those lovely socks... Of course they will be way to big for small dainty feet but ehem... someone with GINORMOURS size 9 1/2 sized hooves would fill the bill! :) ~ just saying'

Hmmm, and they will not make up for selling anorexic hanks? You must be special ;-)

Congrats on the contest win - looks like a really useful prize. :) And yay for decent customer service!!

Was there thunder with that rain, or does Atticus hide from rain even without thunder?

Brigitte- Let me know if the hair stuff works out- I'm desperate and look like a dandelion.

Noogies to the dudes.

Yay for free hair stuff! I'm waiting for Pantene's new long hair stuff to appear in my grocery store. Nothing worse than saggy socks. They're going to be beautiful though!

Did your package ever arrive?

Sweet! I love winning stuff, not that it happens often. So bad about your bike. Good thing it's a good lock.

Poor exhausted kittens - what are you doing to them? Prodding them awake all day?

Wow! That's cool that they sent you all the stuff to make you even more gorgeous! I don't enjoy running around trying to find what's recommended.

Hooray for your bike lock working! and for Anne/Jamieson too! :)

I really like that pink for your socks... too bad that you have to start over. My first pair of lace socks came out too big too, but I didn't know enough to restart so they are now slouch lace socks, in a time when slouch is out of style, of course!
Great free hair stuff! Let us know if it works! My hair could use some taming... it's beginning to look like unsheared Merino. Too bad I can't sell it to knitters!

Wow...they suggested using all of those products? Did they send you a free hair stylist too, to do your hair each morning?

Atticus is scared of rain?