Never underestimate the power of caffeine. 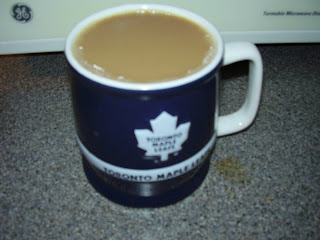 For the past few months, a certain black kitty has learned to tell the time. He knows exactly when it is 3:02am, and he's so proud of himself, he insists on telling me. 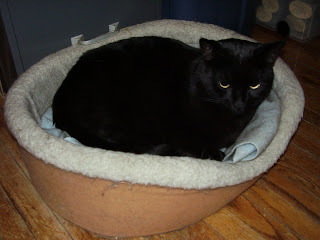 "Not just another pretty face, you know."
Not only does he sit outside my bedroom door meowing while the others egg him on in the background, he actually will fiddle with the door handle, and has succeeded in opening the door on a few occasions. 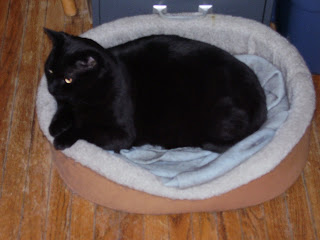 "You'd think she'd be happy to see me. It was kind of a letdown, let me tell you." 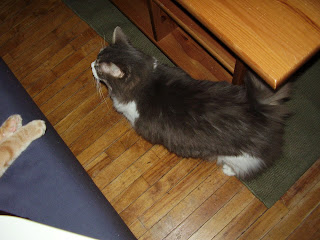 "I would have thought she'd be happy to see us too. And she wonders where Malcolm gets his potty mouth from..."

So, as the title suggests, I've been suffering from a serious lack of focus these days.

I'll admit to the following: 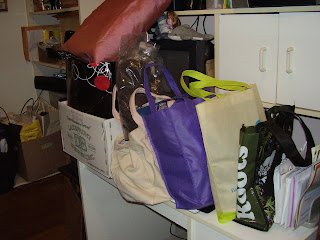 I'm not going to give a count. Let's just say, there are...a few. A lot of what I end up doing is trying something out. Curiosity. But at the end of the day, I do know a few things. I always go back to the stuff I love working on - colourwork, and cables. And there's very little in between. I will knit some lace, and yes, I'm getting better at it. But, any time I venture into a different knitting territory, I usually end up getting bored, and lose interest very quickly. I guess I've earned the right to be one-track minded when it comes to my knitting.

I'm slow getting to some parties sometimes. I do work on socks a couple times a week, and I've determined that top down work best for me. No matter how hard I tried, I just couldn't get the toe on the toe-ups right, and I had a hard time casting off the leg loosely enough.

I like what I have on the go right now. The old faithfuls - Fulmar, Delores, Lorraine's Dorset Down, Dunadd and Princess Line. I have a pair of socks, and I work on the endless stocking stitch body of Norfolk when I can't focus. So, I guess it'll all get done when it gets done.

It makes for some yawn pictures, but hey. It's my knitting. 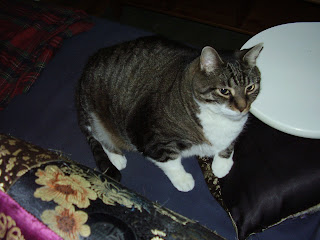 The Old Man has received a reprieve of sorts. His regular vet is away, so he's not booked for another few weeks for his yearly exam. I don't know if you can tell, but the King has his head resting on the side of the little swing table, while reclining on a pillow. It's all good to him.

But, we did have our first thunderstorm of the year a couple weeks ago.

At nearly 12 years old, Atticus is still a bit scared of the thunder and heavy rain. 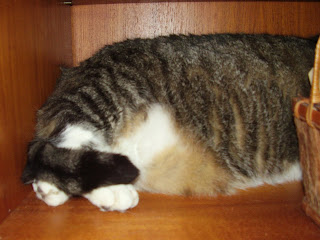 "A bit?? I'm hiding behind girly baskets in shelving unit. It's more than a bit, Einstein."

And this is what Gandalf and Malcolm think of storms. 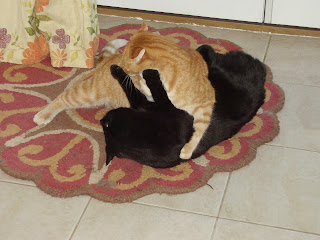 "You're always Batman! That's not fair!"

"Fine, but next time I'm going to be Superman, and YOU can be Supergirl for once."

And in "This Week in What's New Malcolm?". 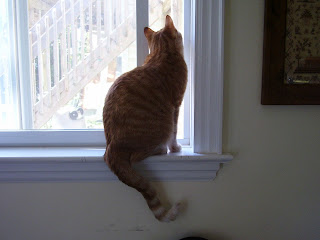 "Awesome! They're like, huge! Not bird huge, or Atticus huge, but...wow. Hmmm... I wonder if Mom would mind if one came into the house so I could chase it around?"

He is fascinated by them. Last week was the orange tuxie from a few doors down that loves coming right up to the back door to harass them. This week it's bumblebees. Next week? Who knows. 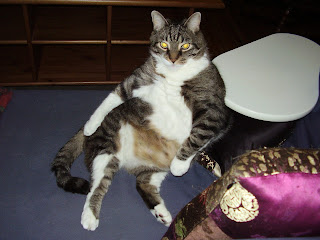 "I'm watching you, lady. If need be, I can be lightning fast. Ninja Atticus! I can strike hard and fast, you won't even see me coming. So, don't try any funny business with the carrier and stuff. The others are weak, and I know your plan. So I hope I instill fear into you. Oh yeah."

Labels: Insane Stash, Little Dudes, This and That, WIPs

Toe-up has never been my thing, and I can do the thicker socks, but I'm not a happy sock knitter. It's boring.

Maybe it's a low-boredom threshold problem we have?

My goodness, the kitteh drama is at an all-time high at your place!

Knit what you love, frog what you don't. Life is too short to slog through boring projects (like I do sometimes).

Cats are so funny with storms! Rosie loves to watch them, the other two head for under the bed!! Malcolm seems completely unworried!

I've been trying to keep my WiPs under control, but hearing about other people's WiP explosions are NOT THE WAY TO CONTROL MINE.... Ack.

Good luck with the kitteh chaos around there!

What *is* up with that middle of the night wake up call? Goofy cats.

Doesn't everyone have UFO's like that? I just found one from 03. Hmm.

I seem to be thinking of grandiose knitting ideas that will never prove to fruition and undoubtedly frustrate me. It must be the whole focus thing.