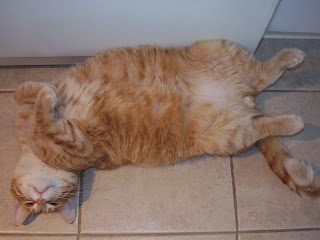 I'm hijacking Mom's blog! She's not feeling well today; something about gout in her big toe. I'm not sure what that is, but it's making her crabby! And she's limping and swearing and stuff. I think it has something to do with her polycythemia. Just something she has to get used to now, I guess. I said to her - Mom, why don't you go lie down, put your foot up, pop some pills and let me take over! She just kept dragging her foot and swearing so I figured, why not. I'll take it as a yes.

Guess who came over for a visit this week!?

Sasha! She came over with her Dad Brian, and Leika's big brother James. Leika's this big honkin' German Sheppard who lives next door. But she's really nice and sweet and all, and Gandalf has a crush on her. 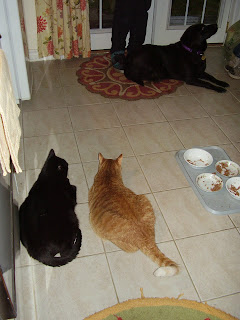 "Hi Gandalf! Hi Malcolm! Thanks for having me over! It's really raining outside."

"You wanna stay for some noms?"

"OK! Oh, wait, I think my Dad is gonna give me noms when we get home."

Oh! I didn't tell you! One day, a couple of weeks ago, Sasha and her Dad were coming home from the park when this puppy just came out of nowhere, and followed them home! She didn't have a collar, or a microchip either (whatever that is). Mom says it's probably because she has some pitbull in her, and you're not allowed to breed pitbulls in the city of Toronto. So, whoever got her got her off of someone who bred them, and that's not supposed to happen. No one came looking for her, and no one put signs up or anything. But, that's OK. She's also got some Lab in her, and boy, does Mom ever think she's cute! Everyone does! I mean, I look at her from my side of the window, and she's always wagging her tail. Sasha says she's a spaz and a 'tard, but I think she really likes having a little sister. Anyway. Her name is Roxy now. I'll try to get a picture next time. But she's always running around, so sometimes it's hard you know. Everytime I see her outside, I have to remember to go and get the camera and that's kinda hard with no opposable thumbs. 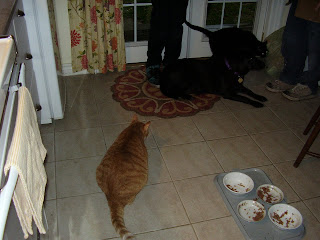 "What did you buy at the store, Sasha?"

"Oh, I don't know. My Dad bought some people food. Is that your food? Kitty food?"

"Uh huh. I think it's Salmon. Help yourself!"

Mae's all - whatever. I think she secretly likes having Sasha over because it means there's another girl around. Ew. 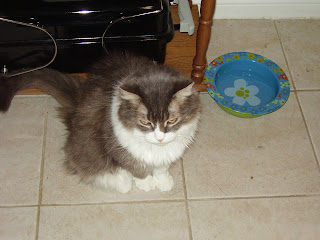 "Don't you be eating my food, dog. I didn't invite you over. Dweeb brothers..."

Mom has been knitting. Honest! I mean, she'd start stuff, and then be all - meh. Then she'd unravel it and start again. But, now she's making these Fair Isle mittens from some Fair Isle book by some lady in Scotland. It's supposed to be the be all to end all! She's liking them. I think she's going to rip them out though, and start over again, because she doesn't like the way the ribbing looks. Humans are so weird. Something about the purl bumps looking messy because of the colour changes. It's not like she has a lot to rip back, she only just started them. And, she's going to use up a bunch of leftover Hebridean 2 ply yarn from that same lady in Scotland! Coooool... And she's also making this red sweater with some Fleece Artist yarn she forgot she even had. I dunno. I remember ALL my toys, so I really don't get how she can forget some yarn she has. Anyway, it's really nice and stuff, so she's making this easy sweater. She's doing it in one big circle, and then when she gets to the underarm, she's gonna slip some stitches on a holder or something, and then go do the sleeves later. Oh, but before she makes the sleeves, she makes the upper part of the sweater. I dunno. I guess I've been watching Mom knit for way too long now. Don't ask how I even know that! She works on that when she's watching stuff on TV.

Guess what else Mom's been doing? And it's been keeping her really busy too. She's been reading these books by some guy named Stieg Larsson. One's about a girl with a dragon tattoo, and in the other one Mom's reading now the girl plays with fire. Oh, and there's another one too that Mom hasn't starting reading yet about the same girl who kicks a hornet's nest. I dunno. Sounds pretty meh to me. But Mom can't get over how good they are. And she reads a lot of books. Whatever. I don't read. 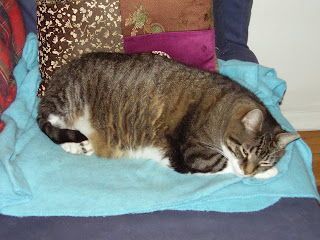 "...stupid books...cuttin' back on my Mom time...bad enough with the knitting all the time...oh, and that work thing..." 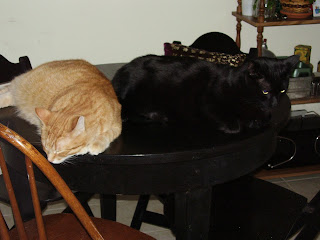 "Take care of Mom, entertain guests when they come over... Eat your dinner Gandalf! Sit on my lap Gandalf! Have a snack Gandalf! It never ends! I'm so busy all the time! I need some me time." 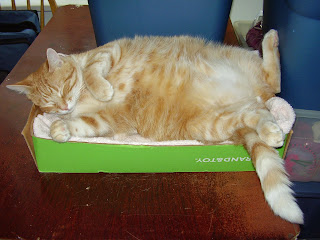 Hey! Wait a sec! Who put that picture up there! (That's my new favourite nap spot. It's the top part from a big paper box! Neat, huh?!)

Anyways! Bye everyone! Thanks for dropping by! And Happy Thanksgiving to all my Canadian friends out there. Today is Thanksgiving in Canada, and I know I'm thankful for a lot of things.

Atticus is gonna show Gandalf and I how to get the ice pack out of the freezer for Mom now. Bye! Again!

Oh Malcolm, I'm very sorry to hear your mommy is under the weather. I hope she feels better soon. Make sure you kitties take extra good care of her.

Wow, Malcolm, you know SO much about knitting - I'm very impressed!!

Happy Thanksgiving to all of you and your mom. And tell her I hope she feels better soon, 'k?

Hi Malcolm! I surprised Sasha didn't snarf up your food. She sounds like a good friend.

Hope Mom feels better quick. In the meantime, you guys keep making cute faces at her & keep her warm. No fighting or making messes. :)

Thank you to Malcolm for keeping us all up to date!

Malcolm, I think that you and Jetsam should be pen pals - you like a lot of the same things, and the same poses ...

I'm glad that all of you are taking good care of your mom. It sucks to not feel good at Thanksgiving. Tell her that we hope she feels better, and to have as happy a holiday as possible.

Gout? Geez, what next.

I hope you feel better soon.

Poor mommy... keep up the good work taking care of her. SHE DESERVES a little TLC!Can't wait to see the knitting!

It sounds like you Little Dudes are taking really good care of your mom. I hope she feels better soon! I mean, who wouldn't feel better, with you guys taking care of them?

Malcolm is so cute I cannot stand it! I hope he is taking good care of you, and that you feel better soon.

Malcolm, what an excellent blog post! Hope you are feeling better, Brigitte!
Looking forward to seeing the Fleece Artist sweater. I love their yarn.

Malcolm seems to be taking after Atticus, both adorable. And so busy! The poor little thing!

Mittens from the FI book? Did you get the reprint? Do you have the original?

Malcolm, you are endlessly entertaining! Who knew you could type? Tell your mommy that I hope she's feeling better.

Hey, Malcolm - thanks for telling us about your mom. Hope she gets better soon.