Malcolm Is A Poet

Malcolm had his annual visit with the vet this past week. I knew he'd gained some weight, but I never imagined he'd gained over 5 lbs in a year!

He now has the dubious distinction of being the biggest cat I've ever had. Bigger than Atticus ever was in his youth. 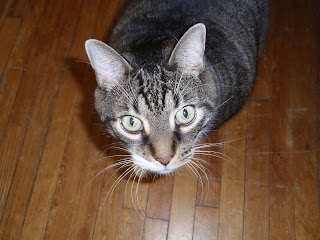 Indulge him, if you will. He stayed up all night composing this little poem. And if you stay to the end, you'll see not 1, but 2 (!) FO's. Seriously.

On Being Chunky, by Malcolm Boykitty the III.
My name is Malcolm, and I'm a cat!
Apparently, I'm kinda "fat". 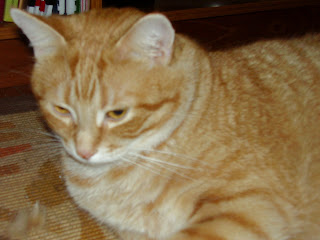 It seems I've gained a pound or two.
My vet was all "dude, what did you do?!" 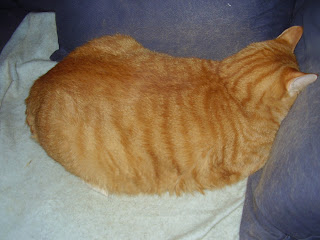 But I like to eat! And I like to sleep!
And sure, playing with my brothers is kinda neat. 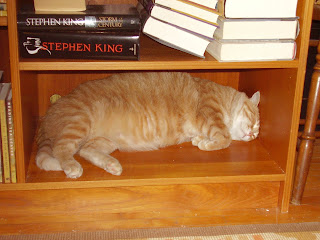 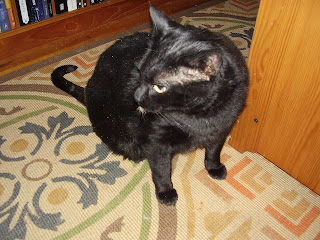 ("Wha'? No! I have not been biting Malcolm's tush. Why would you say that??")
I guess all that just isn't enough,
I'll have to work real hard, and get all buff. 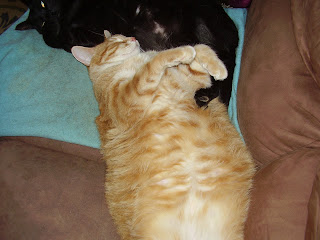 So I'll eat a little bit less each day.
And play a lot more, even with Mae! 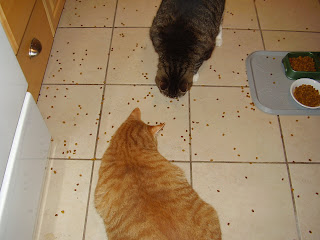 (Accidental spillage...or manna from heaven, depending on if you have 2 legs or 4.) 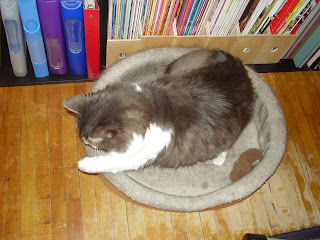 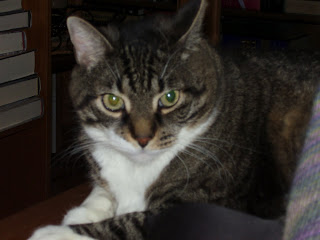 The King.
I'm seriously thinking of buying Malcolm a harness and leash, and take him out to the backyard for walks. We have a big backyard.

Poor little (big) love muffin. He was so pissed off after his vet visit (probably more with the vaccines and bum shaving than all of that weight talk) that he thanked me by pooping in the carrier on the way home. Something none of my dudes have EVER done before. Sure, Atticus has been known to pee on me while I tried getting him into the carrier, but he's never pooped once in the carrier. 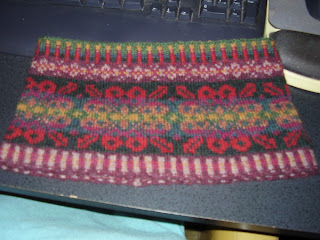 It's a cowl! From the "Maud" set, purchased from Virtual Yarns. Of course, it's been so mild this winter, I haven't been able to wear it yet. I've held off working on any of the other accessories in the set for now; I probably won't get a chance to wear them this year, thanks to our rip-off of a winter...

And! As I have more time on my hands these days, I try and spend a few hours each day working on finishing up long-suffering WIPs. I'm starting with those that have minimal work left to do, and the first up was this: 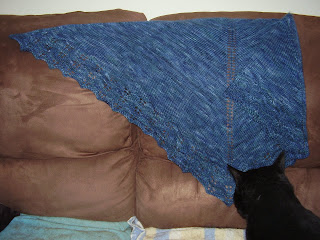 It's the "Oaklet Shawl", by Megan Goodacre. I used some Fleece Artist 4-ply Cashmere that I've had lying around since Pontius was a Pilate, so it was good to finally use it up. I have no idea when I started it. Really, does it matter? I'm pretty pleased with the results; my kind of lace - simple and not too demanding on the brain. 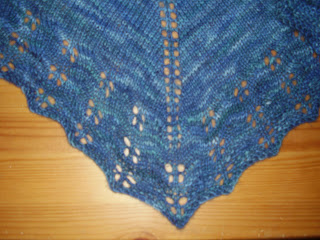 And I even managed not to mangle the blocking process.

What more could I ask for?! Now, don't hold your breath waiting to see more FO's. I have a lot of WIPs... More WIPs than Malcolm has pounds to lose.

Have a great week everyone!
Posted by Brigitte at 5:57 AM

Malcolm is *really* a big boy! I hope he can lose some weight so he doesn't have other issues down the road.

Love your FOs! And I agree that this winter (if you can even call it that) has really sucked. But at least you'll have things for next year.

So glad to hear from you. Give the kitties a kiss from me!

Wait, why the bum shaving?!

Wow - he is such a BIG kitty! (I do love big kitties!) Poor guy being shaved and all - he must have been scared.

I love your shawl.

Brigitte- What a whopper. But KC has him beat by half a pound.

And the shaving- oh, the felinity!

I love your cowl, it's gorgeous! I love the shawl too but that cowl speaks to me. (If you're wondering it's saying "come get me, I'm yooooouuuurrrrsssss" ;)

Lovely FOs! And it's great seeing photos of the Dudes, as always. But wow. Malcolm's much larger than my Suzy!

Hope all is well! I miss you and the Little Dudes. :(

Love the cowl!!! I made the Diamond Jubliee a while back and love it, but it's too warm here, too.

Malcolm looks about the size of our chunk, Mia. God it is like picking up a rock! I think we need to shave her just because she can't seem to keep from getting matted. And she is a shorthair. Go figure. She tries to bathe and then just flops over backward. You can see her thinking "God!!!!!! just forget it."