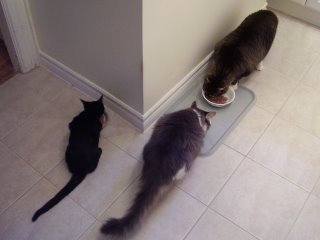 I've had better weeks... But at the end of the day, you come home to the Little Dudes, you have great Knit Buddies to cheer you up (thanks Hammy!), and good friends at work to laugh with.

It could be worse, I always remember that.


Something Is Rotten In The City of Toronto

For the past 8 years plus, I have been very fortunate to live in a lovely neighbourhood here in Toronto. I have an apartment in an old house - built in 1892, before there was anything beyond farmland in this area. It's been beautifully renovated, and it's been home here for myself and the Little Dudes.

Here's the rotten in the State of Denmark part.

I found out late last week that due to a severe mould problem in the basement, I have to vacate the apartment by the end of the year. The Health Department of the city of Toronto were here to measure the mould levels, and found out that the levels are 2 times the acceptable limit in the basement. The owners now have to do a major cleanup on all levels, and it's probably not going to be a good idea to be around for it.

So, I'm bummed. I don't want to move, for obvious reasons. I don't really want to go through all of the hassle, but you have to do what you have to do. I'm concerned for myself, and of course the kitties. Health is more important.

I've started to look for another place, and I'm encouraged by what's available. Looks like I'll be able to stay in the neighbourhood, and probably find something cheaper as well. I'm making the best of a bad situation, and looking at the bright side of things -

I'll be able to really clear out my stash! Wheeee!! 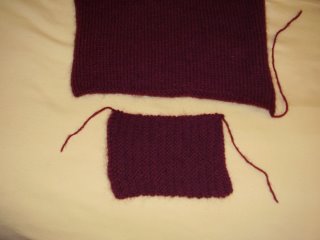 I was breezing along on Lush when I reached a bit of a snag.

The cuff - kind of small for the arm edge.

It is supposed to be a snug fit, and the cuff needs to be eased in to the arm edge, but this just didn't fit! No matter how much I stretched it out.

Even though I pretty much suspected all I needed was to add a few more repeats between the short row shaping on the sides, I thought I'd be a good consumer. I sent Kim Hargreaves an e-mail, in case there was an error in the pattern. I received a response within 24 hours, and confirmed what I suspected. So, I'll just add a few more repeats, and all will be well with world.

And Kim Hargreaves? Fabulous customer service, and I would recommend ordering from her any day. You should have no worries placing an order with her, or having to ask any question on her patterns. They even offered to send more yarn if I was short.

And, while waiting on a response, I was able to work on Ophelia's last arm. I have 2 repeats left to complete, and the cuff! I can smell victory...

You know, once I re-read this, it all doesn't seem so bad.

My brother is down for the Toronto Waterfront Marathon on Sunday (7am start. Oh goodie *clapping hands*.). And - my Sis-in-Law finished 16th out of all the women participants in the Montreal Marathon a few weeks ago! Very cool!

And tomorrow is Friday.
Posted by Brigitte at 4:35 PM

Inquiring minds want to know ... why is clearing out your stash a good thing? Or how do you make it a good thing?

Bummer about the moving but it sure looks like it would be for the best.

Ewww that's icky :( Mold is a tough one to conquer.

I'm glad you are finding things around that you are liking. I will send you good moving vibes! I have to be out in 3 weeks!! Yikes!

And the sleeve pictures would be where?? ;)

Yikes, you definitely don't want to be there for a mold cleanup - or stay someplace that is so moldy! I'm glad you have alternatives in your area. And hey, I'm just now realizing, after living here for 4 years, that moving every other year was keeping my possessions lighter/less than they would otherwise be. Yikes.

Love the picture of all three kitties having their dinner. When I had three kitties I had to put food in three different rooms - Kissy thought that she had to eat everyone's food.

I can see that moving the stash would be a good thing because you'd get to be reaquainted with it. Or because it would enable stash-shopping. But I'm not sure that's what you mean by "stash clearing"...

Well, forced relocation sucks, but at least they're doing it out of health considerations and not because they want to build a shopping mall there.

What a bummer about your apartment - but I also think it's going to be for the best! I hope you and the furry ones will find a beautiful place to live!