Good morning Knitsters! I had hoped to post during the week, however that work thing... Again...

But, I received whole whack of great entries! I needed some help in choosing: 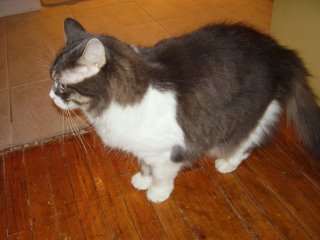 "Maybe if I stare into space long enough, I'll be able to make a decision... Do we only get to choose one Mom? They're pretty good, you know."

Mae's right. There are some pretty good ones. So, the Council of Three (aka. Atticus, Mae and Gandalf) have decided to award 2 runner up prizes as well. 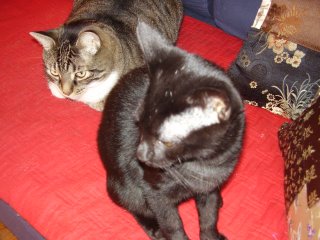 Atticus: "Choices are tough. I myself just go for everything I can. Like food. And sleeping spots."

Gandalf: "...oh look, something is moving. Must investigate... I wonder if jumping Mae will result in a beat down? I can't remember what happened last time, so I'll just have to go and see what'll happen. Seems like deja vu, for some reason... oh well."


So, allow me to introduce - DALARNA! 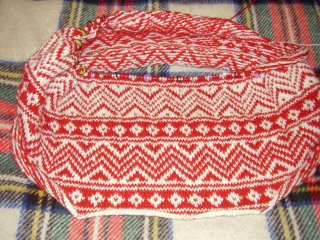 The winning entry was submitted by Wendy. As she explains it - the red and white reminded her of the Dalarna horses. And it does, the horses are beautiful, and fit in nicely with the whole theme of the photograph as well.

But, as I mentioned, there are also prizes for the 2 runner ups as well -

Trek wins with her "Charlie Brown" entry. Yup, the stripes do remind me of his shirt! Makes me laugh when I think of it. Thanks Trek!

And Emily wins with "The Surly Norwegian" - after about 15 rounds of red and white...well, that about describes it!

You know what was so great about having this contest? All the new knitting bloggers I've discovered. Thanks everyone!

A special mention also goes to my sister, who really came up with a cool one - "Alice". But not for the reason you guys would think now... Heh. Actually, Red and White was the name of a grocery store chain in Ontario/Eastern Quebec. Our paternal grandmother used to shop there, and we both have vivid memories of her telling us in Quebec french how she was going to the "Red and White". And she'd buy us these suckers, and leave them on top of her old fridge (remember that?). So... her name was Alice. Eener, you get your prize at Christmas! She'd also like me to pass along a big "Thank You" to everyone who wished her a happy birthday last week. She's pretty amazed at the kindness of the knitting friends I have - and I second that!

I'll be sending e-mails out to the winners this morning.

I've also posted a progress picture of Dalarna. It doesn't look like much - I've been spending much of the week (when not swearing at my support Blackberry) working on some charity knitting for the Annex Cat Rescue, the organization Gandalf was adopted from.

She does move along quickly, but the yarn? Springy. Much more than Shetland 2-ply. My usual floating method - spreading out the stitches on the right hand needle before changing colours - doesn't work as well with this yarn. As a result of the bounciness, I have a few longer floats than I'd like in some spots! I think I've figured out the right length to strand. It looks puckery in spots, but I'm pretty confident that blocking will even all that out!

Hey, like the tartan blanket Dalarna is resting on? That was a gift from my brother (he's another wacky marathon runner...). He serves in the Canadian military, and a few years ago, he was in Scotland and picked it up for me.

Thanks again Knitsters! It was great meeting you all, visiting your sites, and reading your entries.
Posted by Brigitte at 6:02 AM

Good choices! Congratulations to the winners. I did looks for names. Honest! But I forgot to email until last night when I saw a comment by you on another blog.

How does the Hifa 2 compare in terms of scratchiness? Would you wear any of the yarns (Hers', Jamieson's, J&S, Hifa, Finullgarn) next to the skin?

Dalarne - a perfect name for your very beautiful cardigan.

I've got that same blanket Brigitte -- exactly -- it was made in Scotland, and I picked it up at the Gaelic College in Nova Scotia when we were down there a couple of summers ago!

Hey Bridge- Great name- is that the only thing you're working on?

Be careful when you deliver the mousies to the Annex Rescue- a kitty may pop into your handbag.
Nice picture of the elusive Mae West.

That's an excellent name!! And the sweater's looking spiffy - I can see the Charlie Brown bit.... Oh, poor Gandalf. I can already tell you what's going to happen...

Dalarna is a great name - I just had a look at the horses at the webpage, and it fits perfectly indeed! Congratulations to the winners!

Aw. Kitties. Kittens who don't learn and the cats that school them.