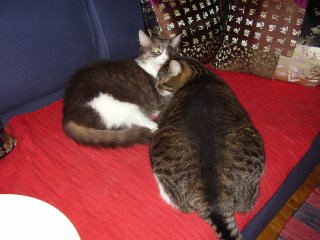 "I thought we agreed you'd get that little pipsqueek Gandalf to do this..."

Well, it's been a bit longer than I wanted since my last post, but hey! Better late than never.

I was kind of hoping I would have these golden pictures of the Little Dudes playing with their cousin Finnegan (that's a *hint* to his Mom to send me some!). We puppysat the little guy last weekend. They all ended up being fast friends, with Gandalf and Finnegan actually napping together in his crate. Who says cats and dogs can't get along!? It was just so funny to see them interact together - Finney playing with their toys, Gandalf and Atticus sizing up his toys (he has a "Bobo" from the PetSmart commercials), especially the mysterious blue ball that squeeked. Auntie Brigitte sure loved that one after they all got a hang of making it squeek. So, hopefully next post will have some pictures of Finnegan's visit.

After babysitting, I headed out to lovely St. Catharines for a visit with Finnegan's Moms. I always have such a wonderful, relaxing time when I go there.

And I had a lot of time to work on Dalarna - 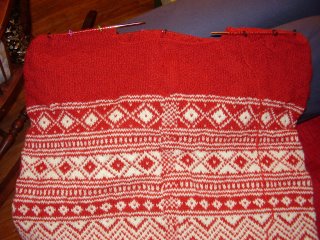 I'm at that point where it doesn't matter how much you knit, it seems like you're making no progress.

Right now, I'm toying with the idea of knitting the arms in red only, instead of incorporating the stranded red and white design as she is originally made up.

What do you think?

Here's a link to the finished picture.

I'll have a bit of time to decide what I want to do with the arms, as I'm now knee deep in my Christmas knitting. I'm finishing up the last of my charity knitting. I've been knitting a bunch of kitty toys for the Annex Cat Rescue, some of them being Wendy's Catnip Mice. She was kind enough to let me use her pattern from her wonderful book - Wendy Knits. Hopefully the ACR can raise a lot of money to continue their good work in saving these kitties!

Ah, the Christmas knitting... There'll be no pictures, unfortunately, although after Christmas I will post them as FO's. One in particular I intend to finish in record time! It's going to be all *bleep*, all the time! I'm already off to a great start... Just imagine it, ok?

OK, I don't think I would stand in line 72 hours for new releases of Starmore books. This is just crazy though... It's a GAME people. Do you remember the mayhem when those Cabbage Patch kids came out in the 80's? You had people brawling in stores just to get their hands on one?

I hope I never become so enamoured by material items - including knitting stuff - that I forget about what's really important. Beating up my fellow knitter for the last skein of Hand Maiden Cashmere...that's just wrong.

For cryin' out loud, just stalk her in the parking lot, and offer her double the amount she paid if you want it that badly. (That's a joke...)

What about you?
Posted by Brigitte at 5:19 AM

Unbelievable what people will do to amuse themselves - just the thought of standing in line for an hour gets me the nightmares, let alone for *so* long. Argh...this is beyond me!
As for Dalarna (how beautiful she is already!), it's been highly interesting imagining her with plain red arms only - and I have to say, the more I concentrated on that image, the better I liked it! It would give the whole of it a bit of a calmer touch I think, and thus the design where it is will be way more prominent. Yep, I think that's a good idea indeed!
Love your cat pics as always!

It's ridiculous! But have you seen what they're selling for on Ebay? I don't understand why those companies release them when they only have so few.

Dalarna looks lovely! I wouldn't do the sleeve totally in red. I would do the last/first 37 pattern rows closest to the cuff.

Shot for a playstation? Good grief.

Not me. I hate waiting in line for anything. Ever. If I really want it, I'll either pay through the nose or outlast your interest.

Darlarna looks great! I think it would look fine with mostly red sleeves, but it should have some of the body design. Maybe around the cuffs and again at the biceps?

Hey Bridge- It definitely needs some pattern on the sleeves- just sayin'.
I'd stand in line for something if my kids wanted it badly enough, but the PS is $750.00! Alexander wants the new Nintendo- and there'll be enough to go around. It's a marketing ploy- supply and demand. Sony should be ashamed.

Dalarna looks fabulous!! I think at least part of the sleeve needs to be patterned, or the sweater will look sort of unbalanced.

What the hell?! It's just stuff. People (even people you don't know) should be more important than stuff. Yikes.

I wouldn't do it for anything in the world - I just hate waiting in line for more than a few minutes.
Dalarne is very beautiful so far. I think the sleeves need some pattern, but you're the knitter so ... you're the boss :)

I'm voting for at least some of the pattern on the sleeves...