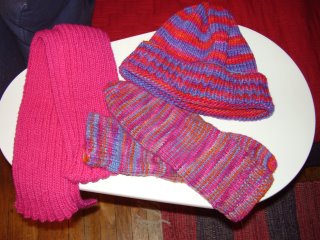 And it is absolutely as LOUD and PINK as it looks in the picture!

Pretty cute, huh? Although the hat is supposed to be the same colourway as the mitts, it doesn't look it. The mittens have had some mileage. I purchased these 3 items from Morehouse Farms. Pretty standard instructions, but I have to say, the instructions for the mitts were different from what I've done before - knitting a "gusset" for the thumb, placing them on a holder and then picking up and knitting the thumb once the main body is completed. Makes for a much more comfortable thumb, and a much "neater" look as well. This will be my new standard for mitts! Now if only it would start getting a little colder here in Toronto so that I can wear it.

Thanks everyone for your lovely comments about Dalarna! I've decided to work the arms as indicated in the pattern - stranded for the whole sleeve.

And I've started it. 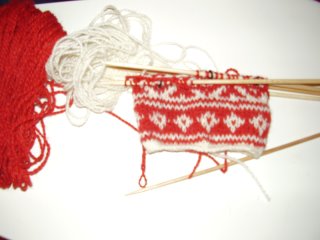 I know, my progress is staggering.

I haven't worked on it much - I've been knitting away on some Christmas stuff.

So, Marina (how does she find this stuff?!) found a link to another blogger who has worked on Alice Starmore's VK 1994 pattern I'll be working on (check her comments from my previous entry). And she has a name - Delores.

You should have a peek at Jewel's blog - she gives all the information you need about joining up a "Dale of Nor(th America)" KAL that she has started up with Lorraine! 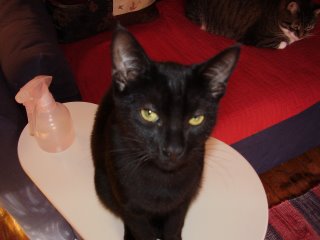 "Delores? Delores? Don't you remember that Seinfeld episode where Jerry couldn't remember some girl's name, but knew it rhymed with a female body part?? Delores was one of the names he thought about."
(Gandalf thanks his Aunt Lorraine for that tidbit!)

"Oh, and what's this I hear about getting something 'removed' on Friday?? Atticus says that when I get home I'll want to start redecorating the kitty beds and sit down for tea with Mae... What's up with that?"

Gandalf has a very "knowing"look on his face- you haven't told him, have you?
Where did "Dolores" come from? It doesn't call it that in the magazine. I never knew it had a name.
Good luck on Friday.

Be careful what you wish for! That storm that hit the west is nearly here and it might just go your way after that.

Ooo that Atticus is a bad, big brother!

You know about the missing paragraph re : Delores, right? It's in the KBTH archive.

Um, two days ago it was nearly 60 and today it was flippin' 7F when I went to work. *shivers*

Chaos is chuckling to himself, Gandalf, and wishing you a lovely time tomorrow. May peeked out of the cat carrier (she loves the cat carrier! she doesn't care that it carried her to the vet!) to wish you well and to let you know that she won't shun and hiss at you when you get home from the vet....

Mmmh, your mitts-hat-scarf set is yummy - sometimes we just need a bit of funky colors! The way you described you did the thumbs is the one I've learned doing mitts-thumbs with, and though I haven't tried any other version yet, I always thought this is the best one - you proved me right now, thanks for that ;)