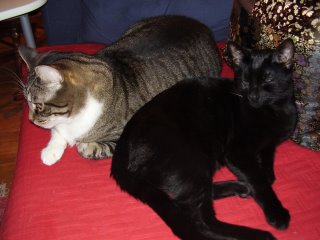 Gandalf: "You know, it wasn't nearly as bad as you made it out to be."
Atticus: "Oh, I know. Gotcha going though!"
Gandalf: "You're a big meanie! Well, they were really nice to me, and I got to cuddle with all the nice people at the doctor's office you know. And they gave me a mouse to play with too! So there! NEAH! *sticks out tongue*"
Atticus: "Fine then, be like that..."

Gandalf came through with flying colours, and is pretty much back to himself. (Chris, there was hissing and whacking on the nose too, but lasted only until Saturday morning.) He of course was a perfect little gentleman at the vet's office, charming them all to the point they told me they almost didn't want to send him back home! 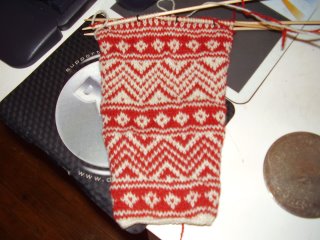 Here in Toronto, we received our first good snow fall yesterday! I wish I had taken a picture... But of course, you don't think of things like that at the time.

Dalarna's first sleeve is coming along quite nicely, I'm pleased at how quickly she's knitting up. I'm about 2/3 of the way through the first pattern, so probably about half done at this point. The pattern doesn't give you a final stitch count, you just end it when you get to the end of the pattern, and knit on a facing. You increase throughout every 4th row, which is pretty standard.

I've also joined up Lorraine and Jewel's Dale of Nor(th America) KAL, and of course, selecting a project is a pretty scatter-brained affair for me. I keep going from one to the other, then I see something else... I think at this point though I will be working on one of their Arans. Pretty sure I know which one, but do I have the link? Of course not! Next post... And for anyone one on the fence about joining the KAL - it doesn't have to be a Dale of Norway ski sweater! They have much more than that - from the very complex to the "beginner" stranded sweaters, kids stuff, and loads of accessories too! I even had an afghan on my short list... So, lots to choose from. And, it starts up the 3rd week in January, so you have a bit of time to decide.

I had a good chuckle at the quiz on Marina's site - How Canadian Are You? Some of the questions are pretty stereotypical - but I still came out at 100%. (Heh, the Smarties question... oh, the memories!)

And, have you seen this?! Chris has a pattern up on Magknits! And a very cool one at that - what to do with one ball of Kureyon. A very cute little bag, Kureyon-Chan (love the name!). Check out her site for some cute pictures of Chaos and Mayhem modelling the bag.
Posted by Brigitte at 6:30 AM

Hi Bridge- Extra noogies to the Dudes.
I only came out as 97% Canadian. A bit of a mixed breed.

The Dale party is in full swing, did you see the Fox sweater? Don't look!

Glad the "baby" took it so well. Atticus, you need to tell him about the long term effects ;-)

I'm so glad Gandalf is doing well after his little "snip". I took the test and I was only 59% Canadian. That's more then half, eh?

Gandalf, you are very lucky to have such nice siblings - Chaos didn't relent for two days after May got home from the vet.

I came out 62% Canadian - considering how far north I live, that's not so good...

Yummy - that sleeve is coming along *so* nicely, I'm still totally amazed by the pattern!
Hmh, as for that quiz - I came out 97% Canadian - does that tell you something about me? ;)))

Cool, snow! Now you can use those mittens. I'll have to look for the gusset mitten pattern, I really disliked the save-7-stitches routine without picking any up. A gusset would be even better, I think.

Dalarna and the sleeve so far looks great!

Aww. Gandalf. And his buddies. I'm only 37% Canadian, which is only surprising because I'm 2nd generation US in my family.

So are you renaming Dolores?

Gandalf, you'll be a much happier kitty now! Glad you had an easy time of it.

You all are tempting me terribly...must not start a Dale ...must finish 7 other projects first!

Found my way here from your comment at My Middle Name is Patience. I'm American and scored 100% Canadian (married to a Canuck and lived in the Toronto area for several years). He's a Leafs fan and I'm an Avs fan and I wanted to say I know just who Tim Horton was and the tragic way he died.

Of course we import our coffee from Canada - LOL I also know all about President's Choice, Bulk Barn, In and Out stores! OK I'll stop now.

Oh wow - I just looked at your Diva, Lush and Opehlia projects. Those, my new knitting friend, are beautiful. What a great job.

Amazing that you are just getting your first snow! I always think of Canada as way ahead of us when it comes to snow but then I guess I should put myself in a totally different US category since I live at 9,035 ft elevation..LOL We have had lots of snow and it is here to stay until early June.