You know... Have you ever mentally prepared for a post, only to discover that you can't seem to find one important piece? Like, your camera cable? 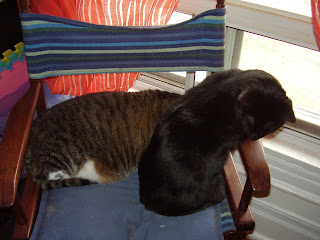 "What?...Why do you assume it's ME? Here. Lemme help look for it. Atticus, move out of the way, you're blocking my search grid."

Pretend if you will that Windsor Waistcoat has 4 inches or more of patterning. Just think of how much more there will be next week! Bonus! And, you're guaranteed to see something new. Just sayin'.

So, in lieu of our regularly scheduled knitting photos, I bring you a 20-questions sort of thingy (courtesy of Bridget) to keep you interested.

1. Gone on a blind date? Um, yeah. One, and only one. Ew.
2. Skipped school? Well, I never skipped school, but I did skip the odd class in high school.
3. Been on the opposite side of your country? Sadly, no. Either direction. But soon I will be a regular visitor to Nova Scotia!
4. Swam in an ocean? Yes! The Mediterranean. Cool. AND I got stung by a jellyfish. NOT cool.
5. Had your booze taken away by the cops? Um. No. What the hell? Who wrote this stuff? I didn't get drunk for the first time 'til I was 18.
6. Lettered in a high school sport? Huh? I'm guessing this means participating in high school sports? No. Although I did really like playing soccer.
7. Cried yourself to sleep? Sure. Who hasn't?
8. Played a musical instrument? Oh, that is FUNNY. But no.
9. Sung karaoke? Yup. I was working on a kibbutz in Israel when I turned 20. I remember singing to Tina Turner in our little volunteer's pub, which was in an old bomb shelter. The other volunteers were there, as well as some of the locals, and we had a grand ol' time! Best birthday I've ever had.
10. Cheated on an exam? No! Not too toot my own horn, but high school didn't exactly challenge me. So, I didn't really need to cheat... However - even in math, at which I excelled at sucking at, didn't inspire me to want to cheat either.
11. Played spin-the-bottle? I think so...
12. Laughed until some sort of beverage came out of your nose? Dudes. C'mon. Of course. This is me we're talking about. I once laughed and coughed so hard at the same time a Tic Tac I had in my mouth came out of my nose. Seriously. Like last year.
13. Watched the sun rise with someone you care about? Sure!
14. Ever been arrested? Nope. Although I did get pulled aside and had my luggage thoroughly inspected when I left...somewhere. Can't remember where. Oh wait, it was at LaGuardia airport in NYC, and I was coming back from Israel.
15. Gone ice skating? Oh. C'mon. I'm Canadian. Have I gone ice skating!? I only grew up in Ottawa - home to the Rideau Canal, the longest outdoor skating rink in the world.
16. Been skinny dipping? No. Sorry, not even a funny story to go along with that one. Not to mention the answer to #4. Once burned...
17. Been on television? No, but I did accidentally walk onto a set of the James Bond movie "The Living Daylights" when it was being filmed in Vienna, Austria in the late '80's. What? They should have marked it off better.
18. Thrown up in front of a date? No, but I have afterwards. Maybe one day I'll tell you about the time I threw up after a dinner date, which consisted of eating some very fine Hungarian goulash and red wine. Um. Only I was uh, kinda asleep when it happened...

OK! So, it's actually only 18 questions.

Let's ask the guys a couple of questions. 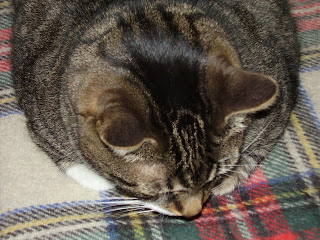 "Atticus, what would you say is the most destructive thing you've ever done?"

"Hmmm...Well. We'd have to go back to my younger days... But probably the time I got up on top of the fridge, then made it over to the shelf where you had your cookbooks and some crockery pots. Remember? Oh yeah! Then I knocked them down! On the floor! One was full of rice, and the other was full of like, dried something or other. That was back in your serious vegetarian days. I seem to remember you vacuuming rice and stuff for a long time after that. Come to think of it... Even though I was pretty pleased with myself, I don't remember you being that thrilled..." 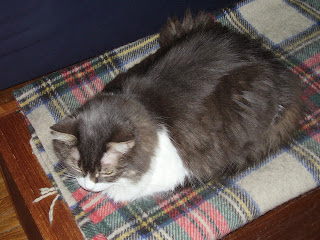 "And what about you Mae? What's the most destructive thing...oh wait. You haven't really done anything. Um. What's your first memory, Mae?"

"Oh, I remember being 7 weeks old, and following Atticus EVERYWHERE. I was so. cute. A little fluff ball. Didn't you always say that the cutest thing I did back then was flop down the stairs after Atticus? Remember? I was like a little grey puff ball rolling down the stairs, with little back feets sticking out? I was awesome." 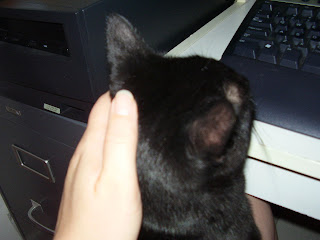 "So, what about you Gandalf? Uh, what do you have to say for yourself? What silliness have you been up to?"

"Gee Mom, that's a loaded question. Let's see... Um, I like dogs, especially my cousin Finnegan; I've fallen into the toilet twice; eaten fruit, sweet potatoes, bread and licked curry sauce from your plate (that was on a dare from Atticus); I've hidden behind the toaster oven; fallen asleep in the kitchen sink; gotten sticky packing tape caught on my nose (and I couldn't get it off!); bonked my head a few times against the window... Oh! Remember the time I scared you when you found me hiding in your back pack?! And the time I fell off the bed when I was rolling around? Oh, and Atticus once sat on me! And then there was the time I meowed to the TV everytime that dog food commercial came on; oh and..."

Right. That was a loaded question.

Tune in next time for more excitement, and pictures!

Labels: Little Dudes, This and That, Weird Stuff

What a great post, and good for you for getting the kitties to participate!

I always get ready to write a post and can't seem to find the words. Or the camera. Or the dogs. Or anything of any relative importance.

Nice getting to know you better and the kittes of course.

Brigitte- I was the Queen of school skippers- most of Grade 10.

Thanks for the kitty viewpoint-

Please tell me you're kidding about the Tic Tac?! OW!

Kibbutz? Austria? Dang. World traveler! And why will you be in Nova Scotia regularly now?

Hee hee about Gandalf. What a busy guy! And hey, hopefully you found him in your backpack before you left for work...

Very interesting things we find out about you, when the cats (I mean somebody) loses the camera cable.

Poor Gandalf! But having a TicTac come out of your nose beats everything he's done ;-)

"Been on the opposite side of your country"? ... If you lived in Singapore like I did, you could go around it in a few hours, depending on the traffic! In my younger days, I circumnavigated it in a canoe.

Yeah, I know what you mean! I was ready to blog & couldn't view my photos. When I finally found & downloaded them, they showed up in blogger in reverse order. So, I had to totally change my thinking...and I had problems with spacing... I blame the bunnies! ;)

I found out how boring I am via the questionaire. 'Hi' to the kitties. :)

I can just picture Mae as a darling fluff ball w/black feet? And seriously, Gandalf could have gone on forever.

I joing Lorraine in being a school skipper. Ice skated once WHILE skipping school. I have a hysterical mental picture of little Mae bouncing down the stairs. Bless her little kitty heart.

I adore your cats. That Gandalf could have his own reality show!!

Isn't Austria lovely? My favorite part had to have been the pastry shops, though. I fell in love with the Austrian bakeries.

A Tic Tac out your nose! I didn't think that was possible. Live and learn.

Gandalf is a busy boy! Must be trying to live up to his namesake. I'd be careful about having any sort of fireworks lying around.