I've been asked a few times in the past week to show off what I've got. No, not that. Be nice. 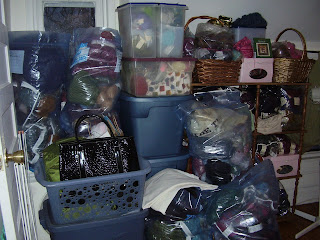 You get only one guess as to what this is. My stash, in all its glory. How do I even go about putting it up on Ravelry?!! OK, so what's not in the picture - um, there are two small bins sitting under the laundry basket with my work stuff. And my basket of sock yarn is on the floor, below one of the big honkin' Ziploc bags. Oh, and the shelf? Is actually a bit bigger than it looks. It holds all the stuff in kit form. Although the stuff in the bags in the upper left hand corner of the picture is actually sitting on my dryer, so it's not as bad as it looks.

OK. It is. Yes, in upcoming posts I will show you how it's *somewhat* arranged. As much as I can arrange it.

And to be fair: 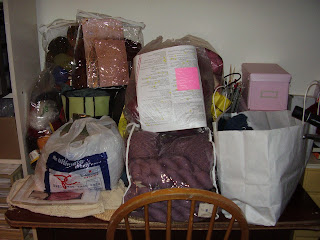 My WIP table. Which would probably be somewhat less busy if it weren't for Marina queuing pretty much the same stuff I want to make. Like now. (Say in Jerry Seinfeld voice - "Marina!" like "Newman!".)

Oh, ok. Because someone is bound to ask: 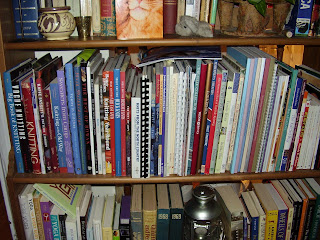 Most of my knitting books. Most of them... You know, because some are in use...

Yesterday was a banner day! I had visitors from Knittingham, as in Lorraine and her daughter Laura. As always, we had a great day. We went on a yarn crawl, Atticus and Gandalf successfully sucked up for treats, and I got pressies! 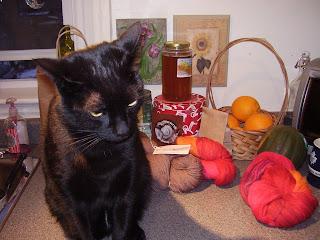 "Look! I rearranged everything for you Mom! You're welcome."

It's near impossible to get a half decent picture with Gandalf around... But, you can see pretty much everything - a huge honkin' hank of Brooklyn Handspun Superwash merino in "Earth", 2 skeins of Lorraine's handdyed yarn (the stuff I coveted in the summer - it has orange, pink and fuschia! Love!), some Body Shop stuff, tea, treats for the Little Dudes (not pictured for obvious reasons) and a super special pressie - 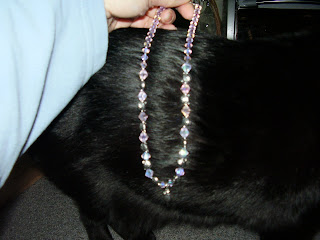 No, not Gandalf. The pretty shiny thing resting on him! It's not easy to photograph, but it's a handmade necklace. The little shiny things? Cat heads. The dangly thing at the bottom? A mouse with a movable tail. And what I'm stupidly covering up with my hand at the top? The clasp, which is a cat. It is too cute, let me tell you. I'll have to lock myself in a room, and take a better picture next time around. It's just so funny! 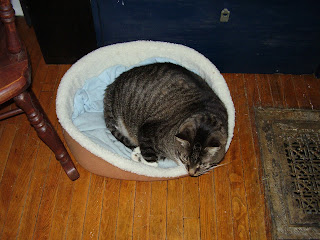 "Funny? I'll tell you what isn't funny, and that's that camera. Let me relax a little. My life is hard you know."

The cat bed is a hit. I think they have a rotating schedule - Atticus in the morning and during the day, Mae is usually there after dinner and throughout the evening, and Gandalf during the night. For the most part. Unless he feels the need to muscle in on Atticus.

He doesn't muscle in during Mae's rotation though. 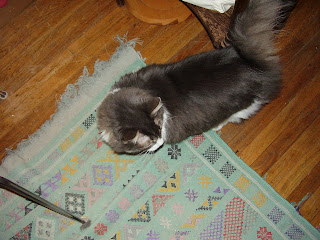 Mae would send him away with a growl. He listens to her...

Oh, and before someone asks about what I picked up yesterday during our yarn crawl. I didn't show it for a reason - you'll see next time around. Yes, that means another WIP.

Hmm, impressive! Love to have a closer look ;-)

Oops! I've been queueing a few of the Starmores in sport & DK weight, (while taking a break from miles of moss stitch). Who knew I had so much yarn in those weights ;-)

Lucky thing! The presents are lovely and I don't have enough stores here to go on a yarn crawl.

What well behaved kitties! The dogs just bulldoze each other.

I think your stash and books appear to be perfectly reasonable. :-)

Aren't kitty helpers the best? Or are they the worst? Well, they are something, that's for sure.

I can't wait to see the necklace close up. Shiny? With kitties? What's not to love???

I find the stash goes up on Ravelry quite quickly once you start uploading the photos....

Sounds like a great day indeed! What wonderful friends. :)

Well, poop. Here I was hoping that your stash would make me feel smug that my stash was puny. Um, no. Darn it.

Bridge- Ravelry photos will help you when you can't quite remember what something looks like, or how much you have. Plus, you can put stuff up for sale, which is great.

We had fun too. Just wuvs those kitties.

... and I will never feel guilty about my "stash" again lol, although I feel a need to start building or ordering some more FI kits so maybe.....nah

Impressive stash! I've got mine strewn all over the house. There is no way I'm going to catalog it, denial works best in the dark.

Pretty pressies! I wanna see a closeup of your special necklace. Although I was quite charming of Gandalf to both rearrange and pose for pictures.

I had to come over after hearing about Chris' comments about her stash. :) Impressive stash. Luckily my stash is spread all over the house so it doesn't look very big.

Gandalf is such a good helper. That's nice that they can schedule the kitty bed too!

There is no way I'd catalog my stash. Just think of how much time that would take away from actually knitting time! Moving it around and checking on it every once in a while is just fine.

It took me weeks to put my stash on ravelry, bit by bit, but it helped me not buy yarn for nearly a whole year! I finally broke down and bought some encore for an afghan this last weekend.

We should have a flash your library blog post. I have two bookcases full of knitting books/magazines. And I gave about 100 away to my sister. I used to buy A LOT of old mags/books on Ebay. Not so much any more, however I have two more knitting books on the way to me. If they ever come that is.

I'm so envious of your LYS crawling with Knittingham. Makes me want to move to Ontario, except for the fact my DH is a federal US employee, so I'd have to leave him, which is not a choice right now. Who else could bankroll my knitting addiction!
I can't do that here though... not enough LYSs.
Great pressies!
Don't feel bad about not showing off your stash on Ravelry. I never did any of my "ordinary" yarn... only the "rare" ones that I though other AS knitters would like to see.

Your stash is nice and compact. Mine is sorta all over the house. It is nice to see it all together on Ravelry though.

I just waited til dh went out of town and collected the stash from all over the place and got it out, catalogued it, then took pics. Fortunately Flickr uploader is so easy, so the actual putting it on Ravelry is easy. I'm so glad I did, because now I can look and see what's there that I've forgotten about since it's hidden in the bins. ;)
I can't wait to see your stash catalogued.

Quite a stash! After seeing yours, I think my stash is much too small. I only have 1 large, 1 medium and 1 small tub and a medium tub's worth of sock yarn.

Glad you had a great time with Lorraine and Laura. The yarn is really pretty. And such a nice pressie.