Sometimes, all you need is a kick in the pants. And sometimes, that kick in the pants has to come from yourself. And it can remind you that for reasons you may not understand, you need to focus on other things.
Of course, had I listened to myself, and realized that I was only stressing myself, I could have avoided the last few stressful weeks!
After finding a great apartment, filing out the forms, getting the certified cheque done, I decided I'm going to stay put. Did I make the right choice?
Less than one hour after dropping off my papers at the (potentially) new place, I received a phone call from my current landlady telling me that her mother, who had originally rented this apartment to me, had died. I can't tell you how sad that made me. As much as my current landlady may frustrate me, her mother and father were exceptional. They treated me as one of their own.
After I got off the phone, a whole bunch of memories came flooding back. Sophie was in her mid-80's, and was very matter-of-fact about life. She was born in the Ukraine, and would tell us stories of growing up there. How she lived through Stalin's collective farms in the 30's. Living through the Battle of Stalingrad during WWII. Escaping to England after the war, and coming to Canada. Her husband George was no slouch either. As a young boy barely in his teens, he was in the Resistance, fighting against the Nazis in Romania. He too escaped after the war, and made it to Canada via Scotland. And they met and married here in Toronto - working several jobs to eventually put both their kids through medical school, and buy 2 houses that they rented out. They really were the salt of the earth. Often I'd come home from work to find a container of perogies or cabbage rolls left inside my door. And every year, Sophie would plant a vegetable garden in the back yard for her tenants from seeds she saved from the previous year. And in the fall, she'd plant her garlic. She'd cover the back yard with leaves, explaining that it was the best way for the garlic bulbs to "mature". Then she'd trudge back to their house, not too far away, and nag George into something or other. I remember my surprise, and everyone else's, when she came around one day to tell me to take $20 off my rent because I was the only apartment with an electric stove - all of the other apartments had gas stoves. When George died a few years ago, she'd continue to come around, but eventually she passed everything on to her daughter to take care of. She still lived on her own; we used to say "as long as Sophie still went to church, everything was OK with her". She was still going as of last fall.
What can I say? Slave to the memories? If so, it's not so bad. I just don't have it in me to call up Lena and say - sorry about your Mom, oh, and I'm taking off now. Let her get Sophie's stuff in order, and I'll revisit moving later in the year. It's the least I can do to honour this wonderful lady who did so much to make this apartment a home for me.
And it's OK. I'm actually a bit relieved. And you know what? Ever since Psycho Sister moved out downstairs - things have been much better. It's up to me now to get that lovin' feeling back. And it's started, little by little. I'm going to take some of my bonus money (whatever's left after Atticus and Mae get their teeth cleaned, that is!), and maybe buy a few new things I've been meaning to get for this place.
So, did I make the right choice? Yes.
Maybe now I can put more focus on KNITTING. Because you know. This is a KNITTING BLOG. Sheesh.
And because of all this, I neglected to show you this beautiful acquisition! 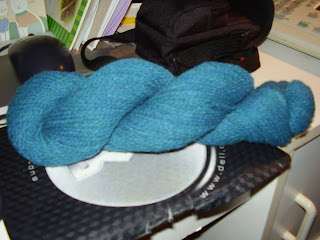 Some Hebridean 2-ply in the "Strabhann" colourway, from Virtual Yarns!

Lordy. It's a beautiful colour. I was going to make the Driftnet Wrap, but, I'm thinking I may end up making something else with it, because the colour is so amazing.

What do you think?

The Little Dudes Have A Pissing Match, or, Neener Neener Jerk-Face! 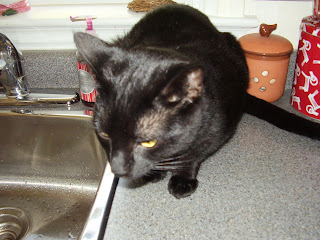 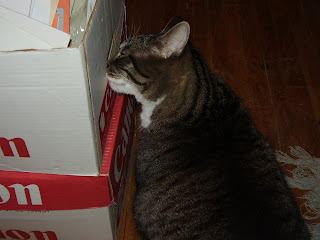 "...*hiss* to you too! I went to the vet! So what! Geez... Stop making those engine noises Gandalf, you sound like a old fridge." 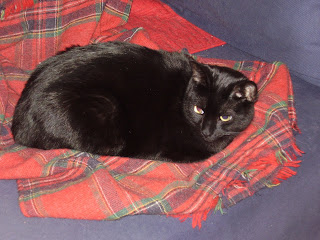 "Gandalf! Stop being a jerk! Don't hiss at your brother!" 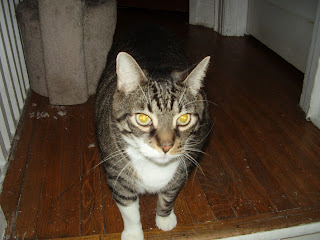 "He's really trying my patience. Why do I have to be the "bigger" cat? I don't want to walk away. He's annoying. And lame." 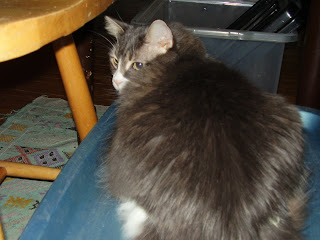 "You guys are dweebs. I'm going to eat your food. 'Cause you're obviously too busy seeing who's the tougher one."

Gandalf spent most of the day yesterday growling and hissing at poor Atticus - who had to endure a trip to the vet, a rectal exam, a needle, and a blood test. I was standing in the waiting area with the Captain, cringing at the noise coming out of the exam area! Poor guy. It took 3 people, 3 towels, and a Hannibal Lector-type mask on his face to finally get some blood drawn from his back leg. Well, at least they know what to expect when they put him out for his dental work.

And, he was NOT happy with me for a few hours after we got home. By the afternoon, he had settled down, and was basically ignoring Gandalf's tough-guy growls. But still, it was...annoying. If seems better this morning, although there were a few times when Atticus would whack Gandalf on the head out of annoyance.

Mae? Loving all the food. While these guys are busy trying to out-do the other, she's scarfing back all the food.

I am sorry to hear about Sophie. She lived a full life and experienced much - bless her. As for you, hope you can get back to enjoying your home. The boys seems to be doing fine! LOL And Mae - she is a smart girl.
Hugs and good wishes to you. It is hard to loose a friend.

As long as you made the decision for what you believe in and it feels right, then it was the right decision. You can always revisit the situation in a few months.

and yes those cats sure know how to make a kitty coming back from the vet welcome! PFFT!

Sophie sounds like she was quite a lady! I can understand your wanting to honor her. Poor Atticus. Nobody likes a rectal exam.

It really is amazing what getting a few new things and doing a mass reorganization can do for your enjoyment/perception of your place!

Poor Gandalf. He and Chaos sound like their vet visits go about the same. :) And who knew that Gandalf could focus on something for so long, eh?! ;)

Even though it sounds sappy, I think that your decision to follow what your heart is telling you is a good one. Whether for a few months or another year, etc., you'll be happier with yourself.

Salt of the Earth people are a rare gems. I'm glad things are better now. Only you can decide what's best for you... sounds like you know that. :)

Do you like Strabhann more than Summertide? Looks more turquoise to me, which I love. I'm a VY novice compared to you. :)

Mr K has a brother now! He's acting like Gandalf... My brother's pictures turned out better than mine, so I'm waiting for him to send them to me. heehee :)

Bridge- Yup, pierogies and cabbage rolls- that'd do it for me.

Poor Atticus. I'd be smacking Gandalf upside the head occasionally too. Mae's the smart one.

That's so sad about Sophie, she sounds terrific.

Well, as long as you're at peace with your decision, that's what counts.
Your yarn is gorgeous! Of course I can say that... it's the same color I picked!

What a difference a day makes :) You've gotta do what you've gotta do ~ listen you already know that wherever you hang your hat is home sweet home, so embrace your place AND enjoy my friend!

I'm glad things are going better with your housing situation. I am sorry to hear about Sophie; it sounds like she was a wonderful woman.

Poor Atticus! And then to finally get home and have Gandalf act all snotty towards him. Naughty Gandalf! Mae is the smart one of course.

That's a pretty wrap for that yarn. But then the yarn would be pretty in many things!

Of course you made the right choice, because it was your choice. That is the beauty of a choice, its right because you made it.

And besides now the cats don't have to becaome used to some place new.

Well my dear, it sounds like you've done a lot of soul searching. I hope everything works out for you and that home feels like home again.

Alright guys, you know you all love each other, kiss and make up.

Ignore comments on previous post! You sound very happy to stay and that is the important thing.

My condolences to you on Sophie. It sounds like she lived a very full life and passed that on to others. What a gift.

Poor Atticus! And he doesn't know yet about the dental work, sigh.