Sometimes I think if it weren't for the guys, I'd have nothing much to report on. Well, almost nothing.

I know this much, if it weren't for them, I would probably not be able to say - I now can do this. Or that. Or the other thing.

The other thing being - what's that smell? Atticus, did you step in poop? Roll in it?

Not quite. If you've a weak stomach, by all means hit the next link on your page, or in your favourites. That's OK. I won't hold it against you.

Now, I know they say that animals, especially cats, won't really let on that they're in any discomfort until it becomes intolerable to them. So, when I noticed an icky smell coming from Atticus, I thought at first he had...stepped...in something. If that were the case, he wasn't trying to clean himself like cats do when they're dirty. At least my guys. I zoomed in for a closer look, and noticed a matted section on his back. And STINKY. I took out one of their brushes to get a closer look, and managed with ease to pull away the matted section. Only to reveal a puncture mark on his back, and some pretty vile stuff crusted around the top. And I noticed he had a raised bump around the area. I blotted it a bit, and ooooo the crap coming out of it.

I called my friend Raven, cat-lady and foster mom extraordinaire.

And through all of this, he didn't seem overly bothered. I got a clean towel, some paper towels, antibacterial soap, some antiseptic wipes, and um...vodka. Because I didn't have any iodine or rubbing alcohol. Not for me. Really.

I picked him up, stuffed him in the sink, and washed the area. It was mind-boggling the...stuff...coming out of the area. Like pouring out of it is more like it. Oy. Poor guy. You know, for a cat who normally does not like to be man-handled, he was pretty calm. Mind you, I did have him in a head-lock of sorts. Apart from his heart pounding, he didn't protest too much. So, I kept washing with soap, and draining it until it cleared up. I used a bit of the vodka to clean the area, and dried him off with the towel. Blotted with the antiseptic wipes, put him down, and off he went to finish eating. That's how much this whole thing bothered him. And I was very relieved to see that. 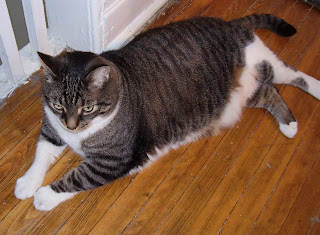 "See? I told you I hadn't rolled around in poop."

Judging by the round hole of the wound, and the location, I know there is only one possible explanation as to how it got there. 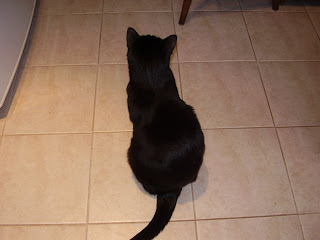 "Dude, I am so sorry! I didn't realize I'd punctured your skin!"

"They thought I'd rolled around in my own crap."

"I'm sorry!! It's just well...like Auntie Raven said...you came back from "that place" smelling like you'd been clubbing all night, and some girl dropped her drink all over you! I thought you were somecat else! So...well..."

"Crap, Gandalf. My own crap. And when have you known me to go clubbing??? Seriously."

I know this much. When Atticus comes back from the vet after getting his teeth cleaned, I'm splitting those two up. I'm not going to risk it happening again.

The boys always "fight", but I've never known Gandalf to draw blood or be anything other than an annoyance. So, I hope this was more "accidental" then intentional.

It seems fine this morning. Nothing is running out of it, and the swelling has all but disappeared. And, he let me kneed the area a bit to make sure it wasn't bothering him, without trying to bite or whack me. I'll wash the area again, and comb it out a bit. I wonder if the hair will grow back? 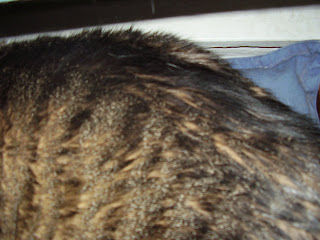 I'll save you the graphic picture, but it's the area around the tuft of grayish hair towards the back.

Man...peace. And quiet. That's all I want today. No surprises. No noise. No smells.

I figured I would take out something I had started working on, and am almost finished, and tell you all about it, but. I decided not to! :D 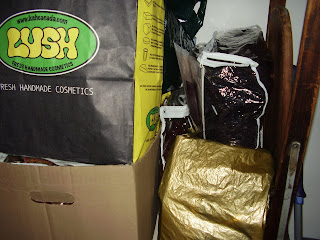 I'll let it stay a mystery!

Somewhere in this picture is a WIP that I'm working on, much to the distress of the other WIP's. I started it because at the time, I just couldn't concentrate on the more complex things. And, it's going so quickly, I've decided to keep going until it's done. (Heh, how novel an idea is that!)

You'll see what it is soon enough.

Until then, fingers crossed that there are no more incidents, funny business, smelly cats, or bald spots that crop up. No more mysteries.

Poor Atticus! How awful for both of you! I hope the rest of your weekend is uneventful.

We went through the same thing on Friday at 6pm, which meant going to the overpriced (cost 2 VY kits), emergency vet. Hope Atticus is better and I hope you polished off the vodka!

Poor Atticus! Glad you found it before it got worse. Oy.

And gosh, you should totally win some sort of Valentine's Day award for that one.

WHAT is going on? I had to take KC to the vet yesterday....

How are you going to separate them?

I'm so glad that Atticus is doing better. I'm impressed that you cleaned it out. I'd be so freaked I'd probably take him back to the vet and say FIX HIM!!!

I'm glad Atticus is feeling better. And tell Gandalf that since this is the first time, I won't mention it to Tess - 'cause I don't think she would be too pleased ...

You're a great mom!!
Poor Atticus, no one wants to be a stinky cat.
And Gandalf, take it easy dude. He's your one & only brother!

You're such a teaser with that knitting project! :)

Oh wow, poor Atticus. Gandalf, as much as I love you, I could come over there and kick your kitty butt.

Happy Valentine's Day! Funny, I didn't see cleaning out a foul smelling abcess on your cat in any of the ads......;)

And TEASE! What're you working on? Monogamy? Oh sure, it's easy to promise in the honeymoon phase.....

oh poor poor Atticus, and poor poor you for having to deal with that. Glad it didn't get too terribly infected and he's getting better.

Poor Atticus... and poor you!
Our cat had an abscess once too, and it healed quickly and the hair all grew back.
We never did figure out what caused the puncture... at that time we only had one cat?
Hope everything works out soon!

Abscesses are horrid, and,you are right, oh so smelly. Hope it is all cleared up and he is on the mend. Jack told Gandalf to mind his manners, brothers don't come along every day!
Have you always been such a fiber tease? You should be ashamed. Making mouths water and the senses come alive! And for what? A picture of a closet!!!

Poor Atticus! Poor Brigitte! Stupid Gandalf. We used to help take care of a neighbor's indoor-outdoor cat, and he got an abscess on the top of his head. It was the worst thing I've ever smelled. Sounds like you did a bang up job cleaning up Atticus though. I'm sure he feels better.

Never a dull moment with the four leggeds, is there?! Though pushing you to show your devotion on Valentine's Day is a bit much.

Glad that it wasn't an emergency and you were able to avoid another trip to the vet. I hope everyone calms down now and you can get a break. Our cats soak up our stress like sponges and we can totally see them act out if we've been feeling crazy.