Peace, and somewhat quiet, has once again returned to the household.
The patient continues to heal, although a bit reluctant to show off the battle zone. 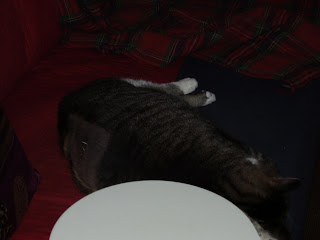 If he were awake and alert, he'd take the time to thank EVERYONE who sent good wishes for a speedy recovery his way. To think - he has all these friends all over the world who know and care about him! He's back to his old self now. If anything, he seems to be cuddlier of late, wanting to be even closer to me when I'm on the couch. Little competitions to see who can cause Mom to overheat the quickest is springing up between him and Gandalf, as they try to cover every square inch of my thighs while on the couch. Great fun! And I wouldn't trade it in for anything.

Oh! And he did want to send some Greenies-induced gas toots in the general direction of the person who said I was crazy to have spent so much money on a cat.

Would you not do anything for a cherished member of your family??

So. Everything *seems* to have calmed down (except for work, ugh) - so, what now?
I face the knitting music - 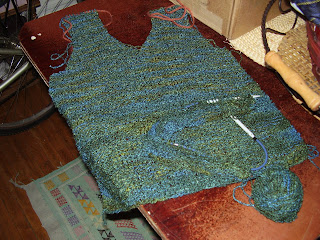 I finish long ago started projects. Such as this little Fleece Artist number. Which, in theory, should take a second or two to make. But, in my universe, it isn't always so. Because this WIP is probably, oh, pushing 3 years old? That's about right. Mainly because the Silk Spun "yarn" may be beautiful to look at, and to the touch, but it is one supremely large pain in the ass to knit with. All those knobby boucle'd bumps drive me cuckoo. But, I will finish this thing, if only to mark it as DONE. After all, it's not difficult... 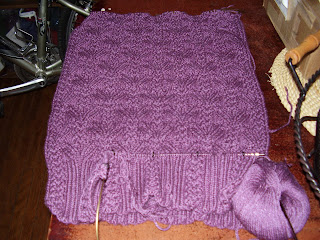 And there is this little number, which I love. Oh, and I may have uh, forgotten to mention it before...

It's one half of "Genevieve", from who else? Fiddlesticks Knitting. One of the only lace designs I will attempt. She makes it look easy, and at least for me - knit-able.

A somewhat close-up of the detailing: 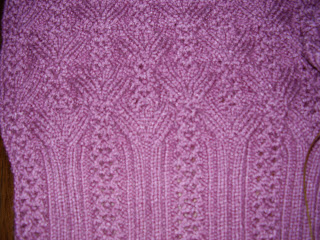 You can't go wrong with Fiddlesticks Knitting patterns, and really, this design is not difficult at all. And it moves quite quickly, once you get the hang of it. I've completed the back, and have started on the front.

Now, the reason I decided to show those 2 projects... I figure if I want to clear up all of the WIP's on my table - 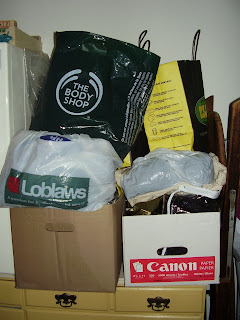 (which does in fact look as bad as it is), I should finish off those that are either simplest to complete, or, are close to being finished. Obviously.

And the Fleece Artist Silk-Vee, and Genevieve are first in line. Never mind what's after that...if I think too far ahead, I'll end up in a corner rocking. And possibly sucking my thumb.

Of late I haven't been up to the challenge of working on anything that requires too much concentration. Go figure.

But that's OK. Little bits at a time. 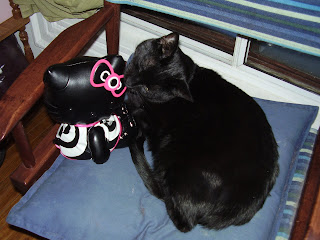 "Oh! You will become my Yoko Ono. Atticus! Mae! I'm going on the road with Yoko!"

Gandalf may have become enamoured with an inanimate object. He becomes even sillier when little Miss Hello Kitty is around. I picked her up while at the MAC store last week, and I also got the tote bag for free! Oh, and of course some MAC cosmetics too... Kind of hard not to pick that stuff up while at the store...

Lorraine understands. She's probably one of their best customers.

Here's to peace. And quiet. And a healthy little feline family.

Gandalf in love with Hello Kitty? That is way too cute!

You've been holding back on us! Genevieve looks wonderful, but I would have picked a different colour ;-)

Hooray for Atticus, feeling better! I'm so happy to hear that.

And do not get me started on anyone who says you shouldn't spend money on your cat/dog/bird/whatever. Because it will quickly get nasty. So please just ignore those kinds of comments.

Gandalf has found true love? They make such a nice, er, couple ...

The MAC store. As bad as a yarn store, as far as I'm concerned.

Genevieve is beautiful and I especially love the color.


So good to hear that Atticus is doing well! And that lap competition sounds like a normal evening around here. Catghans sure are warm, aren't they?

Wow, how many WIPs ARE there hidden in those bags??

(jumping up and down) I got a bag too!

Poor baby, with his shaved back- you give him a kiss from me- you can't put a price on a beloved pet.

I think that you are a closet lace knitter.

Wait! You have a black Hello Kitty?! Where'd you get her? At the MAC store? She's so cute! That whole Gandalf & Yoko routine cracks me up. It's priceless. :D Gandalf has to stay!!!

"Arghhh! Gandalf me matey, ye have gone to the dark side!" Jack proclaims.

Genevieve is adorable! Get er done!!!

Glad Atticus is on the mend. He is looking so much better, even with the square bald patch and staples.

Oooh... I love that color! You've been hiding Genevieve, and she is so beautiful!
Glad Atticus is getting better ;o)

Atticus, I second your greenies toots! Of course we spend what we must for our non-human family members. With five cats and two horses, I have had my share. Ironically, one horse and one cat have chronic conditions (the horse is insulin resistant, the cat has crystal propensity). There have been x-rays on the hooves, a cyst drainage (other horse), a stitched-up cut of mysterious origin (cat #1), special food (cat #2), unexplained weight loss (cat #3), tooth abcess (cat #4)...

Keep healing, Atticus, and toot away.

OMGosh! Genevieve is sooooo pretty and I love the color. I am a lace-challenged knitter - but I do keep trying. Your Genevieve gives me inspiration. I'm glad the patient is recovering. Poor guy!

That Fiddlesticks pattern is gorgeous!! My stash looks just as bad as yours if not worse and I was at Stitches West this weekend.

So glad that some measure of peace and quiet has returned! Anesthesia is a funny thing. My Rosie, who is normally so mild mannered and sweet, hissed at EVERYONE when she came home from the vet. Tim hissed back because he didn't recognize her scent either. Poor things. She had to spend the night alone but by the next morning, everyone was back to normal.

I third or fourth all those who said to heck with those who question vet costs for our pets. When it's your loved one, you don't give it another thought, you just put the credit card on the counter and pray for fast healing!

Good luck on finishing Genevieve and your other top!

So glad Atticus is on the mend. And that Gandalf has found a muse. Genevieve is gorgeous! Of course, one must use the French pronunciation.

What kind of a boob criticizes money spent on a kitty? Ridiculous.

So glad Atticus is truly feeling better! I hope he and Gandalf are now getting along again.

Genevieve is so pretty! For someone who claims often not to knit lace, you seem to knit quite a bit of it.

I'm so glad he's recovering and you got him to the vet when you did! How freaky! Mad cats always crack me up, I don't know why, I've never seen a dog get so annoyed like cats do.

And I firmly believe it is in our power to make an animal healthy, and we won't have to starve to do it, we should and have a responsibility to do it. After all we are that animals caretaker and parent.

But then I'm preaching to the choir.