Last night, the guys and I observed Earth Hour, and turned off the lights. 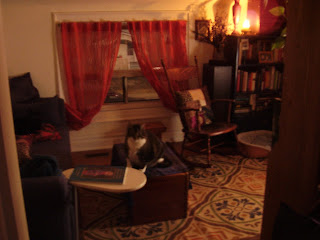 And before that, I tried to work on Isobel of Mar. You know, I'm amazed I actually get ANY knitting done. 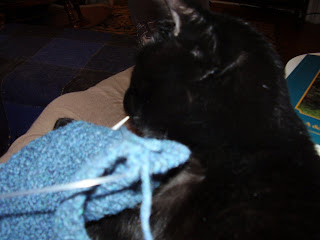 Mae sleeps through it all. 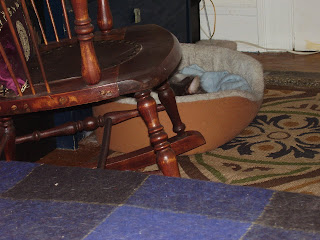 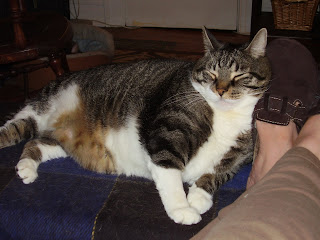 (What is it with male cats wanting to be around you *all* the time? Mae is a much more independant girl kitty.) 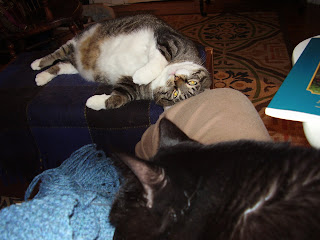 "This won't be a flattering picture of me."

It's a wonder I get anything done. But, look! I actually do - 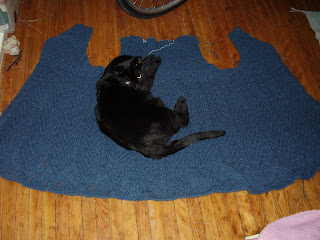 I'm a bit concerned at how this will look on me though. (Just a tad.) The upper back section seems a bit small...so, I hope it will block out nicely. I'm also hoping that I won't end up looking like a puffy blue blob once it's done. Oh wait, I still have the button bands to knit up. OK, we'll just have to see how it turns out.

The VY 3-ply Hebridean "Summertide" shade shouldn't have black flecks in it, but you can see why it does.

So, they had a little contest, and I was entered when I ordered the Driftnet Wrap back in January... Grand Prize was "Boudicca" (the original knitted sample), and other prizes include signed copies of "Aran Knitting" and "Tudor Roses". AND - they were also drawing for the Thistle Bag kit.

I received a very nice e-mail from Alice herself, congratulating me on winning the kit, and letting me know that it would be in the mail on Monday! ME!

Now. I can't remember ever winning anything before. (Oh wait, I did win a gift basket from M&M Meat Shops at one of our work Christmas parties a few years ago. But, that was during my serious vegetarian days. So. It's not like I could take advantage of it too much...) But - to win a prize from Virtual Yarns?!!? You could not get a more excited knitter! I'm so thrilled! And my name is up on the site too, along with all of the other knitters!

I recently received a sample of Summertide ... Next to LapWing, that would be my next most favourite VY colour. Lucky Gandalf, gets to roll around on it.

Woohoo!Congrats on the win. Will that be the next project?

Hmm... Are you having nightmares about moss stitch, mayhap?

Brigitte- An e-mail from AS, that's better than the prize!

We totally forgot about Earth Hour until after it was over. Oh well.

Look at Atticus and his handsomeness.

I'm glad someone else ends up with black flecks in their yarns too ...

Isobel is such a pretty color, I'm looking forward to seeing the finished version.

I too forgot all about Earth Hour. Sigh, the best laid plans ...

Congrats on winning a prize, and being an e-mail friend of AS!

Congratulations on your big win!

We were actually in the car, on our way to a restaurant, during Earth Hour, so we weren't at home to observe it. But it sounds as if it were a great success!

You are so lucky you stashed that Summertide 3ply now that it's "out of production"! One of my favorite colors... although my favorites seem to be which ever one just went out of production! Lapwing, Witchflower, Wild Orchid, Poppy, etc., etc, ... you get the idea.

It's so boring not to be contrary!

Woohoo honey! CONGRATULATIONS! You ought to play the lottery this week as well.
can't wait to see the finished kit

I love Summertide too - figured that out too late, like usual. It's looking good!

Those photos of Atticus make me laugh. He's such a hunk! With his brown belly & round face! heehee!

Yes, there must be some kind of communicating going on! (gandalf!) :)

That is so awesome!!

Aw. Atticus is so cute. Hez has to touch me at all times too, so it's not a gender thing.

That is so cool! And an email from herself to boot. Oy. All that moss stitch. Makes me tired just thinking about it.

I was thinking about participating in Earth Hour, but it wasn't possible this year. I was at the theater, and turning off the lights for an hour would have resulted in some unhappy audience members and some injured actors . . .

You have been busy. An almost completed Starmore! Even if there is tons of Moss Stitch. Tons! It will be beautiful.

And, how do you keep the kitty teeth notches from snagging your knitting?

Why are fat kitties so darn cute? :-)