The Holidays with the Little Dudes

In past years, I've spent Christmas with my sister and sister-in-law, but this year was different. They live in Nova Scotia now, and are building their new house, so Christmas this year was spent quietly and quite happily at home with my little family. We didn't get a chance to wish all our friends a Merry Christmas last week, but you know they were thinking it.

It was Malcolm's first Christmas. 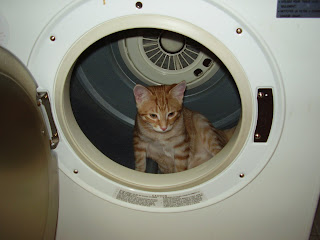 "OK Santa, here's my list! Some crinkly balls, a real mouse to chase around, a red fire truck, um, tae kwon do lessons, a blankie with Batman on it, a puppy, some more crinkly balls so I always have a supply when I lose them...oh! And a role in the next James Bond movie! What? Why am I sitting in this warm thing? Mae told me too. She said that when the door closes, I'll able to see stars!"
So he didn't get a real mouse. Or a puppy. Or tae kwon do lessons... Or most of the stuff on the list, but they did get some crinkly balls! And some tasty treats from the vet's office (sssshhhhhh, don't tell them). There may or may not have been an attempt to dress Atticus up as Santa, but he was not in the spirit this year. 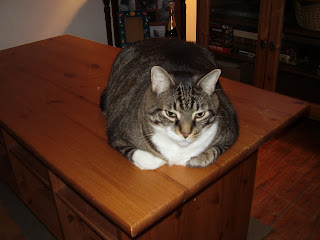 "How is that different from any other year?"
Did everyone have a good holiday? 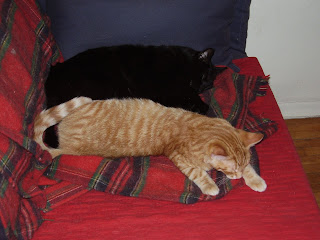 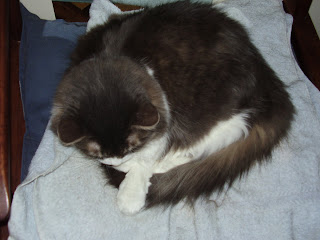 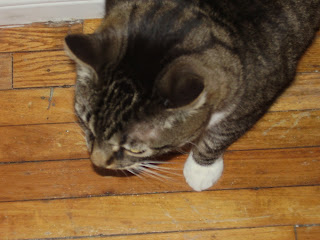 "Santa could be a girl."

"Yeah, well you just don't want to think that maybe because it takes so much organizational skills and pre-planning and stuff that Santa would HAVE to be a girl. Let's see you do all of that present-making stuff!" 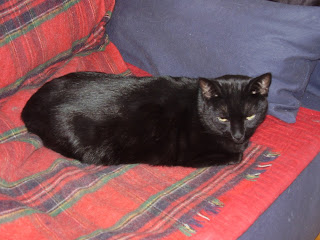 "I thought Mom was Santa."

"Mom! Gandalf is saying you're fat!" 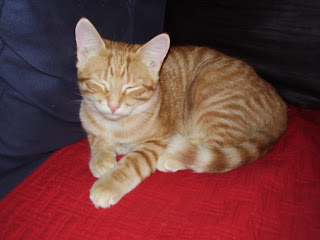 "I'm confused about this Santa business..."
I know quite a lot of places had a LOT of snow and cold this year - we got rain. Lots of rain and wind. Usually when the barometric pressure drops this time of year, I get a migraine. This time around it blocked my ears and gave me vertigo. I've never had that happen, but I'll take it any day over the headaches. 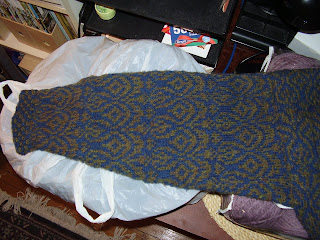 And there's more to St. Aula's second sleeve. Gotta love the power of blocking, because that sleeve sure looks pretty crumpled. As much as I love St. Aula, I'm really not enjoying the process of stranded knitting a 2nd sleeve with 3-ply yarn. Everything is that much bulkier and harder to maneuver. But, it knits up quickly, so who knows how much I'll have done next week. I also worked on Dunadd, which I realize now I didn't photograph...whoops. Now that is some pretty impressive cable work, let me tell you.

Thanks to everyone for reading this year. For all of your encouragement and kind words, I'm very thankful. I've learned more about knitting from my blogger friends than any book could have taught me.

Happy Holidays to you and the kitties. I always like reading and seeing the pictures about your kitty family...Have a great next year.

St. Aula is looking good. Are you going to do the hood?

Sounds like everyone had a pretty good Christmas. Hope the rest of the holiday period goes as well.

Looks like a pleasant, if confusing for some, Christmas!! :)

I can't get over how big Malcolm is. *sniff*

Looking forward to 2010, with new projects. Are you ready to begin the Norwegian KAL?

KC didn't get anything, but he loves rolled up candy wrappers.

Merry Christmas to you and the little dudes. Evidently Santa brought us Malcolm's mouse. St. Aula is looking fantastic!

Are you doing the hood? It looks great. I love those colors.

Malcolm looks almost as big as Gandalf. Your kids are so funny! :)

You are not fat!

I have heard it said that Santa isn't fat - he layers. Hope you have a wonderful holiday. I could use some girl company down here - surrounded by boys! And Jack got a box for Christmas. He likes to hide in the paper.

I remember the first Christmas we didn't travel to see family. I had been thinking it would be awful, but it was actually very cozy and nice. Now I look forward to that as much as anything else.

As for Malcolm's list - my favorite is "a part in the next James Bond movie" - that made me laugh out loud!

Enjoy the rest of your holidays!

I love your little dudes convo's. They're so entertaining. Glad they all had a happy Christmas! Even if no puppies or tae kwondo lessons were involved.

Malcolm looks quite at home in the dryer.

Wishing you and the little dudes a very happy new year!

What a Lovely POST!!! Merry Christmas and Happy New Year to you and your little loved ones! I am in agreement with you.... I've gained so much from my knitting friends in the blog-o-sphere! And you certainly are one of them! Lots of love in knitting in 2010!!!

We had a good one. I hope you do too! Scritches to the Little Dudes, who are as cute as ever.

Looks like you had a great and relaxing Christmas with the little dudes.
St. Aula looks so pretty. You are so lucky to have those particular, early, discontinued colors!