It's starting to look more Princessy. 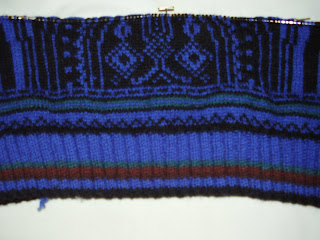 It's not a particularly difficult pattern. Although ask me when I'm duplicate stitching whether I still think so...

(Question: Do I do the duplicate stitching before or after blocking?)

I like that you can look up from your knitting and realize - hey! I've completed over 40 rows! That's one quarter of the chart! It's actually starting to look like something now. And it's much more interesting. I'm starting to feel more comfortable with the charts. The secret really is making sure you're lining up your current row with the previous one. Also, there are areas that duplicate the same stitch pattern as the row below. So, it's not been too bad. The jury is still out on the yarn though. I certainly has a lot of pop, but it's pretty springy. I'm used to good 2-ply Shetland wool. This seems a bit more "processed", and has more bounce back than I'd like. Anyway, I guess what matters is the final product, and I'm very intrigued at how it's turning out.

I'm only getting a couple of days or so a week in though, and that's usually on the weekends. At the end of the work day (at least these past couple of weeks), I've been too tired to concentrate on the chart. And of course, if Malcolm is extending the Kitty Post-Dinner Witching Hour, I tend to not be able to get much in. 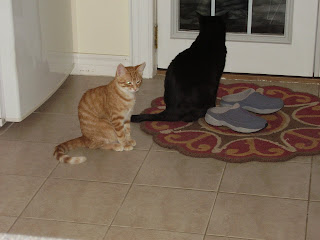 "Um, something about how I have to drop these baby teeth first, then she told Mom I'd be good to go. But I don't know where. And that they're definitely there. Whatever they are."

"Really?!! Is that fun? Will I like singing soprano, Gandalf?!!"

"It's a gas, kid."
The boy had his last booster shot on Friday. He wasn't able to get them all at once - when they gave him his first round in November, he was so tired afterwards for 24 hours that he barely ate. So, we decided that for his boosters, he'd get them one at a time. Much like Gandalf, he's not phased by the vet's office. He doesn't much like getting poked at, but he doesn't mind being in the carrier, or in the office. He'll be going in for his neutering in February, but first, his baby teeth need to fall out. His adult teeth are already in, and the baby ones are about to fall out. Once they do, he's good to go. 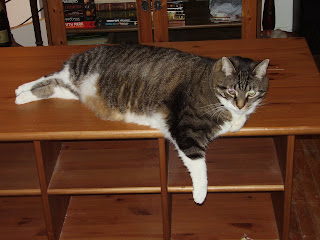 "Guess it's about time I have the Talk with the boy."

"What we gonna talk about, Big Daddy?!!"

"Oooo, girls are groooooooss!! Except Mae! They have cooties and Gandalf says they can be really moody and stuff."
When Chris was visiting last September, she commented that Malcolm is a bit of a drama queen. That he is. He will whine and whine until one of the other guys gives in to him - usually it's to take over a sleeping spot. Mae is the only one who rarely gives in. He doesn't seem to mind. She can be so crabby with him, it amazes me when I turn around and see scenes like this. 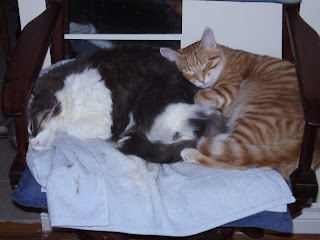 "Well. I suppose it could be worse. Don't know how, but it could."

Awwww....they do amaze me as well when you see that. Phineas was awake when Nikolas plopped down with his ear over Phin's nose and Phin smiled and went to sleep leaving Nick's ear where it landed. So cute...makes it hard to get mad when they get into the yarn

Poor Malcolm! He doesn't know what is coming in February.

that is what I miss about having cats, is their rowdiness then snuggliness. The dogs are sometimes like that, but more gallumphy.

I'm intrigued by your project, can't wait to see more.

Brigitte- Duplicate stitch before you block.

I can't believe how big he is. It's funny how Atticus takes up most of your large coffee table.

I canNOT believe how big he is! What happened to that little fluff ball?!

Your sweater is lovely - looking forward to seeing it complete. I agree with Lorraine -- duplicate stitch first, then block,

Lackie will be getting the chop late February too......he's good to go now but we have to wait because of his emergency surgery in October -- he needs a little time before another round of anaesthesia!

Sweet boys have a way of working their way into your hearts, esp when you are a large kitty and didn't want to give up your seat!!

And yes I do have 4 kitties, I've had 4 kitties for so long that when I'm down to 2, I need to make a trip to the shelter!! LOL

Your knitting is just lovely! Thanks for the info on getting the places I visit up and running on my blog. I appreciate you taking the time to help!

Malcolm is such a cutie! And, I too agree with Lorraine, dup then block. Now, hurry it up so we can all see the sweater!

The blue and black look so cool together. It's going to be a very striking sweater. I bet Mae doesn't mind having a butt warmer.

So cute! I hope Malcolm doesn't mind singing soprano - some of the boys don't, others never let you forget it...

I love the way your sweater's looking. Can't wait to see it finished!

Aww, that is so cute, Malcolm cuddling with Mae! Gandalf calmed down at all or is he still teaching Malcolm Bad Kitty stuff?

Princess looks amazing. For someone who claims she can't work on it very much, she's really coming along quickly.

Love the colors in your new sweater project!

Malcolm's tabby stripes really stand out. Mae might like him more after his vet trip in February, or she might not. The ways of the kitty mind are mysterious.

I never understand why some people don't think cat's have personalities!

Awwwwww so cute. He's getting so big now.

So cute...makes it hard to get mad when they get into the yarn