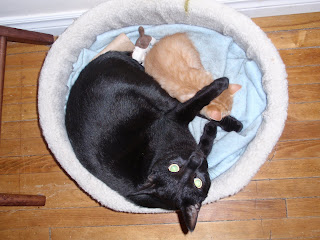 "I'll hug him and squeeze him and call him George! Wait, no. Malcolm. I'll call him Malcolm."
At his first vet visit, he weighed in at all of 1.7 lbs.

And now? The boy went in last Friday for his neutering, and weighed in at 10.4 lbs. 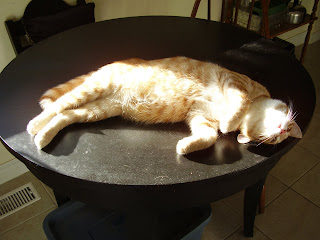 "I'm a bruiser!"
But he's still a doll, and such a sweet little boy. When he's not body slamming Atticus or playing with doo-doo and/or harassing Mae that is.

Gandalf was a bit concerned most of the day. 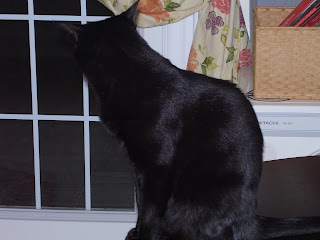 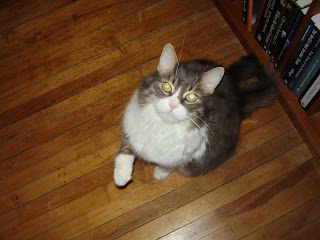 "You're leaving him there, right? Right? RIGHT???"
He came home, no worse for the experience. 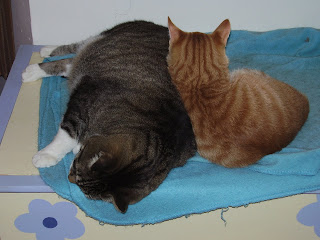 "That was trippy, Atticus. But I feel...funny...now. Like I want to arrange flowers and redecorate Mom's bedroom."
The henna is a keeper! I LOVE it. It worked out beautifully, and I'm so pleased with the results. It did a great job covering up my grey hairs - at the temples, it turned gold/red, and everwhere else, it turned it a darker shade of red. Overall, it's an auburn colour, and it's the perfect shade for me. I ended up doing it twice - the first time I made the mixture too thick, and I missed some spots as a result. And I didn't leave it on long enough. So, a week later (that's the beauty of henna - you won't fry your hair) I did it again. I made the paste much thinner, and left it on a lot longer (nearly 4 hours). I also put the henna is a squeeze bottle (an old, clean mustard container) for easier application, and used a toothbrush to get at the little hairs around my ears. As a result - perfect application!

Now. It does smell. And yes. It's messy. But it works, and it does a great job. I will be doing it again. The henna I bought came from LUSH, and I used the Caca Marron (yes, you read that right) shade. They have a few other shades as well.

Don't let the name put you off - if you've wanted to try henna, I highly recommend it.

Well, here's what I've accomplished on Sapporo in the last week or so. 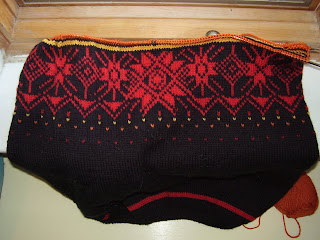 OK, it doesn't look like much, but I have completed the bulk of the motif. It's...different, that's for sure. At this point, I'm more curious than anything to see how it will look once completed. It takes some getting used to. Once it's done, I know I'll be thrilled with it. Just takes some getting used to (why do I keep saying that?). I've never knit a ski sweater before, and I suppose if I'd cut my knitting teeth on ski sweaters and other Dale of Norway designs and was making a Fair Isle design for the first time, I might feel the same way.

This is the time of year when my hands and feet develop eczema, which can make knitting with certain fibers a little difficult. So, I've been knitting small things - socks mainly, as the yarn tends to be a bit softer. I went a week without touching Sapporo, mainly because the yarn was irritating my small girly hands. Things are clearing up now - now they just look red and really, really angry (my hands, that is). When I was a kid? I used to have to wear heavy socks and plastic bags around my feet, and use this smelly cream on them too nearly the whole year. What can I say? I was real popular. 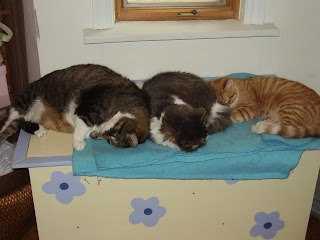 "Oh yay. He's back."
Despite the sarcasm, I'm pretty sure Mae's relieved to have Malcolm home.
Posted by Brigitte at 9:02 AM

Labels: Little Dudes, Malcolm, Sapporo, This and That, WIPs

Yummy kitties! Your knitting is gorgeous as well

Wow. Um, Brigitte? Malcolm's going to be HUGE. I have a house panther - you're going to have a house tiger. :D I'm glad he's doing fine after his surgery!

Where is the picture of your happy new hair???

Bummer about the eczema. :(

It's Malcolm's year - Year of the Tiger. Don't tell him, I can see the others rolling their eyes. :)

Wow - he has grown so quickly! He is going to be huge.

Hope your eczema clears up. Your poor hands.

Lorraine said...
This comment has been removed by the author.
3:21 PM

Chris and I and everyone want to see that gorgeous titian hair.

We want to see the hair!

Isn't it possible that Malcolm still has some growing to do yet? He's a big, big boy! Glad his surgery went well.

Hope your hands clear up pronto!

She's thrilled to have him home. He's so big!!

So what's so different about knitting Sapporo than FI's? Inquring minds want to know.

I love the look of the sweater! I've been trying to decide on a first stranded sweater to knit myself, and I think something with few colors like that might be the way to go... I do love the look of a traditional Fair Isle, though.

Poor little Malcolm, I'm glad his surgery went well. 10 pounds, respectable size I say. My cat Static weighed in at over 23 at one point. (he was a Maine Coon - or maybe he was just a raccoon)

Hopefully spring and summer are just around the corner for your skin.

Oh Malcolm has grown so much!!!! Is his meow a bit more soprano?? LOL What a cutie and wow, he's gonna be huge!!!

I really like that sweater, you're doing a great job.

and I feel for you with the eczema. Both of my kids had it. thankfully they've outgrown it, even though my son still has to be careful with the soap he uses.

Lackie sends his manly regards to Malcolm......in a couple of weeks he will join him in his state of neuterdom.