The Things I Do. 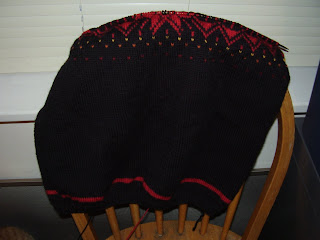 I've done a Norwegian design before, but I've never done a Dale of Norway design before. Above is my Sapporo (if you click on the link - I'm making the same design as shown in the last picture)! I've only been labouring on the black stocking stitch part for 2 years (ok, to be fair to me, I did go months without even thinking about it, let alone work on it), but I brushed off my Continental knitting skills, and zipped through the last 4" or so, and *finally* reached the chart. Yay...! At first, I wasn't too sure if I like how it was looking. Probably because the colours of the lice design at the start of the chart looked a bit too confetti-ish to me. I like all of the colours - deep red, burnt orange and yellow, but together, they just looked...funny (and not ha ha either)... against the black. But, now that I'm working the chart, and the snowflake design is starting to show up, I'm liking it much more. And you know what? I guess I'm used to the very symmetrical motifs of Fair Isle, where it begins and ends quite sensibly. Norwegian designs? Free for all. The front ends where it ends, and the back starts where it starts. And if it doesn't match up at the sides? Oh well. I have my magic centre stitches marked, and that is apparently as important as your future retirement plan.

Oh. And the yarn I'm using (Dalegarn "Falk")? All I can say is that this sucker better block out and nicely. If not (to quote Lorraine), you may just read about a giant fireball seen in the east end of Toronto.

Look what I've got goin' on this morning! 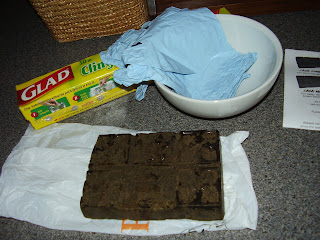 No. Not cooking with chocolate. That ain't chocolate, let me tell you. It's a big hunk of henna for my hair. I haven't henna'ed my hair in years; I've been a slave to the caustic chemical stuff for awhile now. Lorraine told me about the Herbatint she started using, and that started me thinking on using something different to cover my greys. My many, many greys.

So, auburn henna it is. 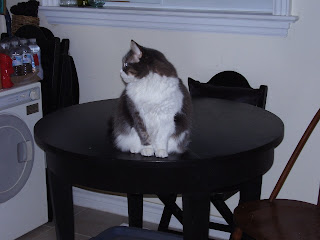 "Oy, that stuff smells funky..."
She's got that right. I have another hour and a half to go with this stuff on my head. And it is no exaggeration when I say that I smell like a latrine.

The things I do to cover those greys... 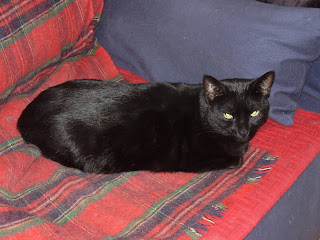 "Why do you have cling film on your head? You'd better not be going outside like that." 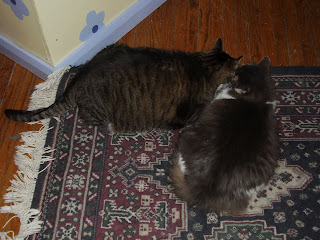 "So anyway, I told Guido that no way was I going out with him if he didn't at least brush himself and that he'd better not be thinking of getting fresh with me because I have 3 brothers who would not hesitate to give him the beat down of all beat downs if he even tried getting frisky with me and even though there are times when it seems that I don't like being around Gandalf and Malcolm I really do it's just that you know. They annoy me."

"...uh huh..."
And in other knitting news. The things you go through to give an Aran the justice it deserves. 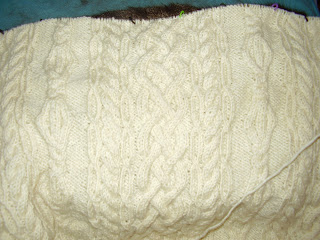 I was so happy, and all ready and psyched to report on a finished back, but when I put Fulmar down on Friday night, I saw that a couple repeats down - I'd messed up the centre cable. I might have vomited just a tiny bit. You can see it, on the left side of the middle portion of the centre panel. *sigh* So. Looks like it's one step forward and two steps back for Fulmar, as I remove the needle and painfully frog until I reach that row (should be oh, about 25 rows, but really, who's counting). And it's not just the centre panel. There are a total of 3 of those panels along the back, and I messed up all 3 of them on that row.

At least Malcolm isn't bothered by it. 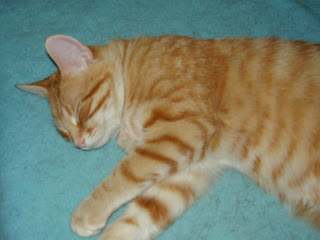 Is your hair done yet?! How did it turn out??

Alas about the cables. :(

Malcolm is so stripey!!!

Your Sapporo looks fab. I had the same issues with Whistler when I finally got to the colorwork. Funky lice & 'free for all' charts.

How did your hair turn out?

How does Henna handle the grow out issue -- those dreaded roots that start showing?

Sapporo will be great when it's done -- and fulmar...definitely worth all the angst.

I love it! Beautiful traditional classic!

I have never done a Fair Isle, but I have completed several Dales. That middle stitch is life or death. Can't wait to see it finished. Really. And Fulmar - it will be gorgeous once done.

Um, is it just me, or does knitting anything that is called "lice" sound highly unappealing?

Hope the hair turned out fabulous!

At least you're consistent.

Malcolm is adorable. You know Mae loves her brothers. On an ice floe. Well, maybe not.

Crossing fingers Falk blocks nicely! I'm sure it will.

It's great that you have been working on Fulmar... mine is dusty it's been hibernating so long.
Hope the henna worked out OK...

Too bad about Fulmar, but it looks like it will definitely be worth it in the end.

Bridge- I'm interested to see how the henna covers gray- I mean, Cleopatra used henna, and she always looked great!

The Dale of Norway is wonderful.... I think the Yarn Harlot is knitting a similar one in the Knitting Olympics!

Look at Malcolm, he's getting so big...

Tell us how the henna turns out! I've always wanted to try it :)

Funky lice & 'free for all' charts.