It's The Little Things

Has it been that long? I hadn't thought so. It seems at times that the weeks just zip by, and at other times the days drag. Remember when you were a kid, and the time between now and Christmas, or your birthday seemed to take forever?
I've been keeping a low profile of late mainly because I just haven't been feeling that great. I haven't had a reoccurance of the gout (thankfully, oy), but the fatigue is taking it's toll. Plus, it seems my liver is now causing me problems, so it's been an endless round of biopsies, blood tests, doctor visits and the inevitable stress that I really can't afford to allow myself to be under. It's all just a bit overwhelming at times. I'm rarely able to handle a full day without going through a lot of fatigue, usually I have to have a nap at least every 6 hours or so. Some days are better than others; and I'm really hoping that they can figure out how to treat this now that I'm having liver problems. Because I can't imagine that at 42, this is going to be the rest of my life. Work is also a huge stress, due to the push to get things done by the end of the calendar year. Which is nothing new - I've been doing IT stuff for years now - the work stress is a good 90% generated from my wingnut boss, who's trying to change the world by alienating everyone in the process. But - fortunately for me, I work at home 4 days out of 5, and she's easy enough to avoid.

So - one day at a time. I remember all the good in my life, and remind myself that I do have so much to be thankful for. I just need to be patient (not my strongest asset).

Hey! Speaking of kids. For the first time, Malcolm got a reminder in the mail for his annual checkup. I guess that means he's somewhere in the kitty teenaged years now. 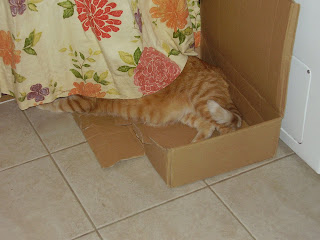 Who needs PetSmart when you have really cool boxes to lie around in. The highly coveted item made its debut when I decided to work on this - 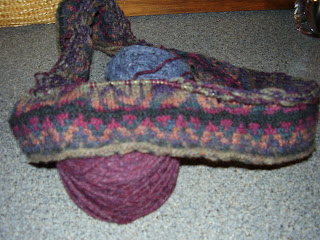 That somewhat blurry picture is Donegal. (I'm not one to deny myself the pleasure of something new.) Before I finally settled on this project, I'd gone through a yarn shop's worth of startitis, abandoning projects sometimes after just one evening. *sigh* When I did find something I liked, I'd end up not having enough yarn, or not liking the colours, etc. Or, being disheartened because I'd made a mistake, and just not liking it enough to rip back. I even messed up a pair of Noro Kureyon socks because it seems that a) I forget at times how to read, and b) I'm a weenie. *sigh*

So, Donegal it is. And I'm happy! Happy enough that I picked out/ripped back 8 rounds when I noticed I'd messed up the pattern in the ribbing section. I'm also working on "Stornoway", from Fisherman's Sweaters. There's not much to show for that right now, I'm still working on 3" of ribbing on 2.75mm needles. It could be awhile. But, at least it keeps me happy. And when I'm too tired or feeling clumsy, I just work on socks. I have enough of that kind of yarn to last me a few life times...
And! Just because - 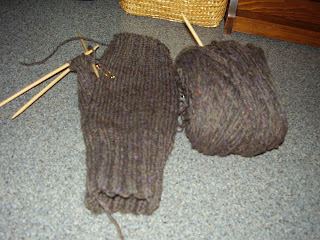 I'm making a pair of those flappy top mittens for my friend Brian (Sasha's Dad). He works outside a lot, and he'd mentioned awhile back that he used to have a pair that he loved. Plus he uh, plays for the other team, so he'll actually notice the quality of the yarn (I'm using leftover 3-ply Hebridean from VY), the variations in colour, will hand wash them when I tell him too, AND make me a cup of tea when I bring them over to him. Can't go wrong there.

Sasha often creeps at my door, wanting to come in for a visit. 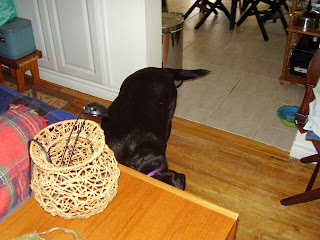 "Cats aren't so bad! They sniff butt just like dogs do."

"Don't appreciate you gettin' fresh, Sasha, you're taking liberties and it's not cool!"

The guys are getting used to it. They're not too sure about Sasha's sister Roxy though. 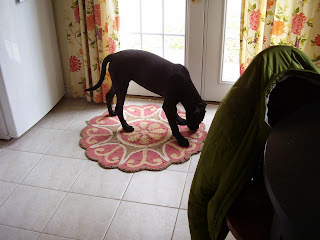 They're really not impressed with Roxy scarfing back they're food. 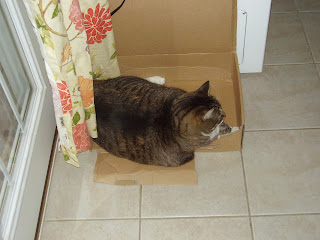 And as if having 2 dogs invade their space wasn't enough. 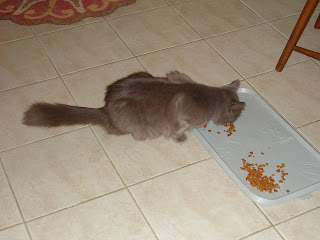 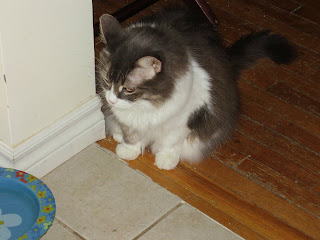 "Who the hell are you?"That would be Mimi. Well, that's what I've christened her anyway. No, I haven't gone and adopted a 5th cat. One night, I was getting ready for bed, and I opened the back door to go and unplug my outside string of lights. As soon as I opened the door, this little grey cat came tearing into the house before I even realized she was there (note to self - may be a good idea to look before opening door). She must belong to someone, as she was perfectly comfortable around me, and the guys. She headed straight for their bedtime snack, much to Malcolm's dismay. 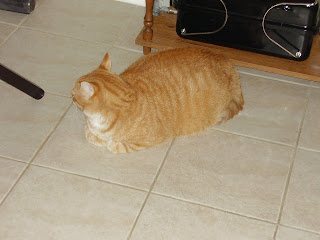 "Who the hell are you?"She then eyed "the box". 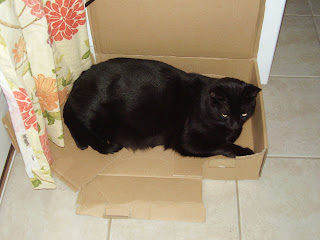 
And when I opened the door, she walked out. I've seen her a few more times at the back door. She wasn't scruffy or wild looking at all, which leads me to believe she belongs to someone. 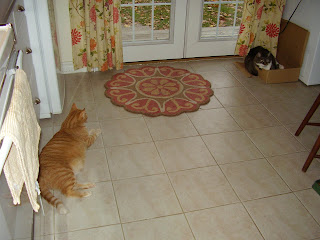 "We shouldn't have let her leave, Malcolm."

"Well, she was eating our food and stuff."

"Yeah well, what do you think's gonna happen now, huh? She's gonna tell all the outdoor cats that some Crazy Cat Lady lives here, and that she's a sucker for any hungry outdoor kitty with a hard luck story. Man, now they're all gonna show up at the door. If it's not dogs, it's cats. What's next? Elephants escape from the zoo and show up here? Geez..."

So, despite everything else, things always do manage to remain interesting around here. I will get a picture of Brian's mittens before I pass them on to him, and who knows - by next week, I may have progress to show you. I'm crossing my fingers that the progress I do end up showing you is of the WIPs I've mentioned today. You never know (neither do I, for that matter).

Labels: Knitting in General, Little Dudes, My House, Polycythemia, This and That, Weird Stuff, WIPs

Bridge- I hope your health issues get resolved- it's cutting heavily into your knitting time.

I guess we'll have to call you the Crazy cat and dog lady.

Ugh. I really hope they figure out what's going on with your liver and the fatigue. :( *BIG HUG*

Your furry family are so adorable - and now to have doggie visitors, bunnies, and now a stray visitor - it's all go at your place!

Your Donegal is gorgeous - worth spending some quality time on I think - so hang in there!

Your health is so important - you are fortunate that you are able to manage right now by working at home - have you considered a second opinion?Perhaps another Dr. might have a different approach? It couldn't hurt.

Love Donegal! I think you need to order more yarn from VY. C'mon, the kids need beds! and you get yummy yarn! lol! :)

Mimi is cute. Good thing it wasn't a raccoon or skunk or coyote.

Oh you poor lady, dealing with health issues is never fun and then add that to work stress. At least you have adorable kitties to keep you entertained. Plus it appears lots of guest pets. hee hee.

Aaaww, such a cute little gray kitty. I hope the Little Dudes didn't mind sharing their snack with her too much.

Elephants! Totally cool. I hope Mimi has a home but yours will do in a pinch.

Ugh, liver problems. They used to do needle biopsies on me but now there's a blood test. Yay! I hope your liver starts behaving, it can really wipe you out.

I LOVE the look Mae has at the corner.

I am so sorry to read about your health issues and the wingnut boss. Best wishes on both and happy knitting. I love reading your posts about the cats and your lovely projects. Take care of yourself!

What a cute interloper you have.

Oh dear you are much too young to contend with all that! :( here's wishing 2011 to be restful, peaceful & joyful!!

Oh no! I hope they get your liver/fatigue thing figured out quickly. Fatigue is so... exhausting. Love your Donegal.

Hope you are beginning to feel better soon -- glad you have all those furkids to look out for you and alleviate the work stress. I've had bosses like that and it just saps any energy you might otherwise have.