Happy Day After Christmas! Did everyone have a good holiday? I did, spending it with my neighbour Brian, his Mom, her dog Rainey, and of course, Sasha. 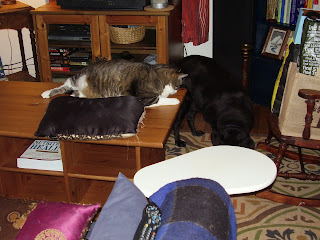 "Oh, look at this. Honest Atticus, I didn't mean to do it! I just get so relaxed and comfortable here..."
She loves coming over, and the guys are getting used to her being around. Although they draw the line at her scarfing back their food.

It was a good time yesterday. We watched movies ("Red", and "Hot Tub Time-Machine", which despite the name was a very funny movie and a great blast from the past for those of us who were in high school in the '80's), played board games, and ate a lot. Brian deep-fried the turkey, which - gross as it may sound - was outstanding. It took 45 minutes (yes, you read that right) to cook an 9lbs turkey. The scalloped potatoes took longer. Deep-frying the turkey leaves it moist on the inside, and as long as you're not eating the skin, it's not greasy at all. I was so.good. So yeah, I didn't say no to seconds.

I donate monthly to the Toronto Humane Society. Every year around this time, they send me a little package, asking for donations, or to increase my monthly donation amount. 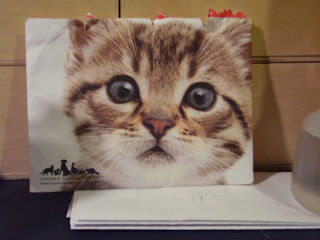 Now, I ask you. If you received this envelope in the mail, as I did, would you not increase your monthly donation amount? The only surprise here is that I didn't sign away my entire paycheck. The THS sure know how to make the most of their marketing dollars. Again I fail at saying no.

Who else has issues with "no"? 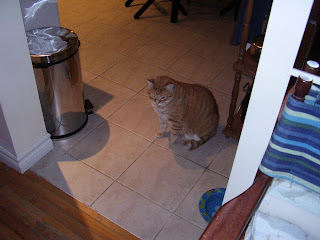 "What? 17.8lbs? No, that's not right! I mean, I can't be...really? 17.8lbs?? That's just me on a bad day! Retaining water or something. I mean, c'mon. It's not that I...really? 17.8lbs. Huh."
Yup. Little wee baby Malcolm is now a whopping 17.8lbs. I about fell over at the vet's office when she told me the weight. It's not easy putting one of four cats on a "diet", so I'm trying to do it in such a way that I reduce the amount they're eating, without compromising the weight of the others. Although Atticus could stand to lose a pound or two. 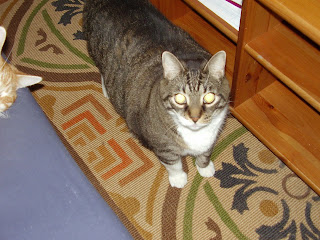 "I beg to differ."
They all get a mix of the old food and the low-calorie one, and a bit less of it too. Some days it's gobbled up, other days they leave some in their dish. So, little by little, I suppose. Unlike Atticus, Malcolm doesn't get crabby when you mess with his food. He may be a bit of drama-queen, but he's pretty easy going. 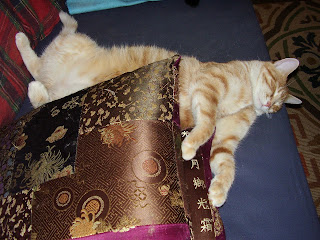 But. The most monumental example of not being able to say "no" of the last couple of weeks?

No. I didn't get another cat.

No. I didn't get another job.

No. I didn't start spinning (unlike another knitter, who I shall just call Labrain...)

Instead. I decided to swap apartments! AGAIN!

Yes, that's right. I'm moving, well, swapping apartments really (sounds so much less work), within the next week. This time, it's the upper apartment of the other section of the house. It's an add-on to the original farmhouse which I live in now (which was built in 1892), and was built around 1912. It'll be my second time living in that apartment - I was there from 2003 until late 2005, before I moved into the apartment directly upstairs from where I am now.

Confused?! Don't worry chickens. I am too...

See, here's why. Firstly - it's $100 cheaper a month. Secondly - I loved that apartment while I was there. Of the 3 out of 4 units I've lived in here, it is my favourite. I moved out because of the renovations. Which brings me to the third reason - new bathroom, new kitchen, new mud room leading out to the deck, which is also new. There was no deck when I lived there. And the bathtub? The original, old claw-foot bathtub with one of those nifty rain shower heads. I'm actually not sure what enticed me more - the cheaper rent, or the bathtub.

It has the same square footage as this one does, however the layout of the rooms is different. Here, my office is smaller than my bedroom, at the new place it's the reverse. I don't need such a large bedroom, however I do need a larger office/stash room.

So, have I started packing yet? Not so much as a shred of paper. I have the next couple of weeks to move in slowly, and if I've learned anything from my past 3 apartment swaps, it's that I don't need to pack everything up. And even what will end up going in boxes will not need to be wrapped and ready to go. I want to be in there by next weekend. Mainly because my main moving help will either be away the week after (Brian), or back in school (neighbour James).

As happy as I am, the guys could care less.

These two lumps have lived in that apartment before. 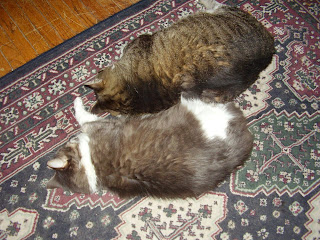 "You like this moving thing, don't you? I guess this way we'll be able to find all of those missing crinkly balls Auntie Chris brought us last year when she came for a visit."
I'm bracing myself - as I move stuff out of here, I'm sure to find not only the missing crinkly balls, but also a quantity of pooplets that Malcolm has batted in spots I wouldn't have suspected. 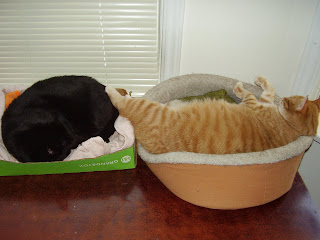 "You say that like it's a bad thing."
After 6 months or so of me thinking he'd grown out of that most annoying of habits, he has started up with digging pooplets out of the litter box again, and playing with them like it's the World Cup.

I'll have a lot of help so that I don't wear myself down. Wish me luck! And next time around, I'll post some pictures of the new digs, and let you see for yourself why I just love that apartment.

Oh! And knitting too!
Posted by Brigitte at 8:05 AM

Labels: Little Dudes, Malcolm, My House, New Digs, This and That

Congrats on the move......sounds like a lovely idea - back to a place that you enjoyed, which has now been "new and improved"......the bath tub sounds divine!

What a great start to a new fabulous year for you!

Hope your move goes smoothly. I had to scroll back and look at Malcolm again when you said he was over 17 pounds - wow - he's quite the man, huh?

Wishing you lots of fun and happiness over the Christmas season and very happy new year. Sounds like the new old place is rather nice.

Exciting! I sort of miss moving periodically - it forced me to go through all my stuff, which I totally don't do anymore.

Bridge- Well, the clawfoot tub would do it for me- now you can use Lush bathbombs.

I think I need to move once a year to keep my house clean. After 12 years in this house I swear it'd take me 3 years to pack everythin gup.

17 pounds! Wow, that is rather, um, large for a cat. Although my old cat STatic weighed in at over 20, but he was a Maine Coon.

Your move sounds like it is only for good reasons, so I'm glad you are going for it.

Malcolm and Jetsam would be good friends. They could have a weigh off, for one ...

Merry Christmas, Brigitte, and all of the kitlets too!

Yay, moving! I don't blame you, that apartment sounds fabulous. How many WIPs will you move? and - packing is overrated.

A claw-foot tub? When can I move in?

Congrats on getting a well loved space back. I had a fantastic apartment, there are days (mainly when something breaks) where I miss being a renter.

I tried to put Evanrude on a diet and he went on hunger strike, so now he just gets smaller portions instead of an all you can eat buffet.