Full Moon and a Half Moon

Chris and I were discussing the effect of a full moon on cats. 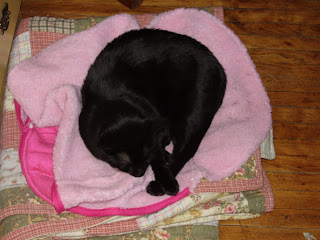 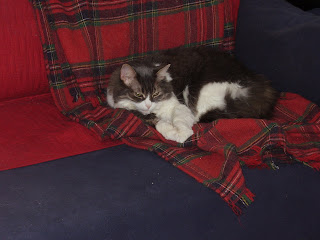 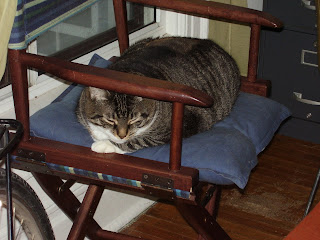 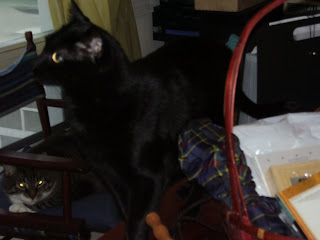 "...Gandalf/Atticus/Mae!...Get off the counter/table/your brother/your sister/my dresser/the computer ... Gandalf! I'm on the phone! No one cares that you pooped! ... Mae! Stop tearing down the stairs and making a mess of the litter box! ... Atticus! ATTICUS! Stop whacking Gandalf! GANDALF! Whatareyoudoing!?!! Stop chewing on the circular needle! Do you want to move off my lap???... *grumble* you guys are worse than kids!..."

Maybe it's a Mars retrograde thing or something, because this full moon? Even Mae *really* tried my patience.
But of course, it's all back to normal. No more dorkiness. Or more than usual anyway.
And when I wasn't at home trying to keep them from destroying the apartment? I was at work, enduring one of the busiest, and most frustrating, weeks in a very long time. I could go on about how people who make scads more money than I do seem to be experts at the Art of Menial Work, but hey. What do I know? I just clean up the mess. And my time? Just not as valuable. Did you know that?
Then, when the dust settled and things calmed down (Friday at 3pm, I kid you not...), I promised myself that I would never let myself become so "settled" in anything I chose to do. If it made me miserable? And it started to colour my attitude about my job and those around me? Time to go. Because I can't imagine getting up every day and subjecting those around me to the misery that I've allowed my life to become. And I can't imagine a point where I would choose to just settle, and give up. I suppose when you do get to that point, being miserable and a pill really doesn't matter - you've gone beyond the point of caring what others think of you.
And what of those I don't work with, who seem to invite discord and misery in their lives? Like my neighbours downstairs? Well, after a few mornings (we're talking 3:30 - 4am mornings) of being woken up by more screaming matches between Those-Who-Live-Downstairs, I received a call from her. Apologizing for all the noise and disruption. And to tell me that she's ended it... Wow, silly me! I thought "ended it" meant...buh-by... but, by the looks of it, it means - sure, stay a bit longer. Because he's still coming here after work. No fighting and screaming though since Friday morning though. Gotta be a record. The Captain said I should just call the cops the next time they start up again. I just might do that...
Oh, and she did mention that she'd be handing in her notice, because she wouldn't be able to handle the rent on her own once Stand-Up-Guy leaves. For good.
I'm not going to comment too much on that, for fear of jinxing it.
Anyway. That's more than enough drama for one week. Once again.
What's really important here? Huh? Why, knitting, of course! 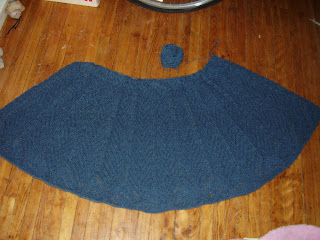 Now that is a LOT of yarn. It's the skirt part of Isobel of Mar (have a peek at Marina's finished one - scroll down to the November 25th entry). I'm showing it off because I'm very happy to report that it is FINISHED. The skirt that is. I'm now up to point where I can cast off for the the underarms, and just work on the upper sections.

As Genevieve was drying - don't get excited, you need to block the front and back before picking up the stitches for the sleeves - I finished up the last of the repeats remaining on Isobel's skirt. I'd have to think long and hard to another project I've done that required so much yarn... Fingers crossed that I have enough to finish her! Otherwise there will be much weeping, and possibly screaming.

I should have enough...

As for Genevieve... You'll just have to wait until next week to see her in all her completed glory. One short sleeve and the collar to go. Yay!
Posted by Brigitte at 7:26 AM

Hmm, glad the full moon didn't affect the dogs! No howling at it or anything ;-)

Isobel looks lovely - love the colour - and I should be able to tell you roughly how much I used, in gms, for the sleeves and bodice.

Brigitte- Do you think maybe it might be a touch of Spring fever added to the craziness?

It's weird, isn't it?! They're so much calmer now. Silly beasties.

I'm crossing my fingers for you re: downstairs...

It had an effect on me, I couldn't sleep the first half of this week!

I agree, next time a screaming match takes place, call the cops. No one should have to live with that.

Love that color of blue. So pretty and attractive.

Isobel looks lovely, I love that shade of blue.

I have decided that the full moon sends the cats back to their wild roots, and they need to act out in some fashion (usually not a good one ...).

And good for you for deciding that you won't stick with misery if you can help it at all. I'm so glad I finally decided the same thing, it really will make a difference down the line, trust me.

Crossing fingers for you!! Enough is enough.

At my work, the powers that be, make scads of money to make bad decisions. I keep telling myself that I'm not paid to make decisions, I'm paid to field the backlash of those decisions...

In every job, there's people who's sole reason for living is to make everyone around them miserable. I feel sorry for them, but refuse to get sucked into their negativity.

Glad Atticus got his stitches removed & all is well in the Kitty Kingdom. :)

Its so sad when others choose to be disrespectful when for little or no additional effort they could . . . not. Glad the kitties are back to normal - ours is always naughtier during full moons too!

and the Isobel skirt is beautiful!

I hate it when all the kitties get nutty at the same time.

Definitely call the cops. And definitely don't stick out a job that's just miserable. Life is too short and work hours are too long to be unhappy.

Hope things get better at work and downstairs!

If it's clear weather, I sometimes have trouble sleeping during a full moon. Maybe it keeps your cats up and then they get crazy. Glad things are calmer now.