It's been awhile! And I hadn't planned on being absent from the blogging world for a few weeks. But, such is life.
It's not that I've been terribly busy, just preoccupied. I've had a lot to deal with - work, for one (ick). And my health. I've had to come to grips with a diagnosis I was given a few weeks ago; and dealing with the heavy-duty meds I'm now on for life.
For years (well, since at least 2006), my doctor has been a tad concerned about some of my blood results. Namely, my red blood cells have been high, and showing increases every 6 months. When my white blood cells and platelets started inching up, she decided to send me to see a haematologist to figure out what was going on. A few weeks ago, he diagnosed me with a bone marrow disorder called polycythemia vera. What it means is that my bone marrow has gone a bit spazy, and is producing too many red and white blood cells, and platelets. As a result, my blood is thicker, which could lead to blood clots (thrombosis), heart attack, and stroke. There are a host of other lovely symptoms as well - fatigue, itching (which is, let me tell you, pretty annoying...), dizziness, headaches, and in my case - vision disturbances, sensitivity to heat and light, and numbness in the extremities. It's a rare genetic mutation apparently. So, in my case, the only way to control the over-production is to take some pretty strong chemotherapy drugs, which I'll be on the rest of my life. Even if my levels go back to normal, I'll still need to take them, otherwise my levels will start increasing. It's a chronic disorder, so it's not something that can be "cured".
Anyway, the medication - called Hydroxyurea - has it's own set of side effects. Nausea, other gastro issues, fatigue in the early stages, loss of appetite, hair loss (it is a chemo drug, after all), and other less pleasant ones I won't get into. I also have to take one low-dose aspirin a day to help with the blood clotting.
So, I'm just trying to wrap my head around it all. I'm lucky that I have an excellent haematologist. He tells me things as they are, and doesn't sugar-coat anything. He thinks I've been dealing with this for at least 6 years, and had I not been diagnosed when I was, the chances would have been pretty good that I would have had a stroke or heart attack within the next couple of years. He doesn't deny either that I could develop leukemia later in life, but also said that it's just a few %'s higher than other high risk groups. But - the good thing is they caught it when they did, and I'm being treated.
I'm going to try not to dwell on it too much. One day at a time. Besides. One positive from all of this? Mosquitoes stay clear of me. They just don't seem to like my blood. 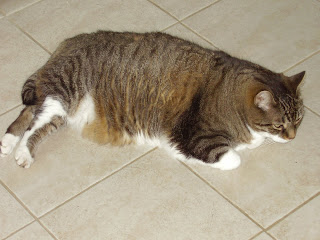 "You know, I was going to start wearing a nurse's uniform so I could make sure Mom took her meds, but then I thought - nah, I'd have to be all nice and have a good bed-side manner and stuff and really. I'm not about to change at my age."

Well, it hasn't all been doom and gloom around here. There has been knitting! Yay! 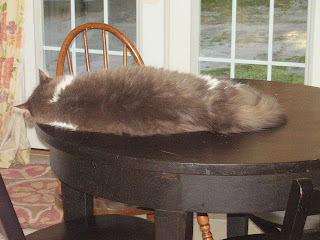 "...about time she sticks to one project...geez. If I had a bowl of food for everything she started and ripped out in the past few weeks, I'd look like Atticus..." 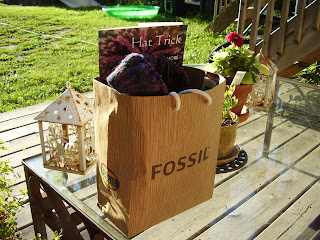 I purchased "Hat Trick" from Virtual Yarns awhile ago, and decided it would be the perfect little project. I've been itching to do some stranded work. I've started working on Dahlia, and it's moving along quite nicely. Once you get past the corrugated rib on DPN's, that is *grumble*. But, the effect is worth it. There's enough yarn to work all 3 hats in the pattern card. I haven't decided which one I'll work next.

I don't know why I keep starting projects that I know just aren't "me". After all these years, I know the type of knitting I like - traditional - and I always end up ditching those projects that don't fall into that category. I'm not saying it's the only type I'll knit, but it is a hard sell to get me to work on something that doesn't use those techniques. Oh, c'mon. Let's face it. I'm a knitting snob, and I know it. So be it.

Hey! Look who also have come out to say hi! 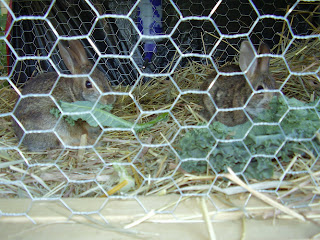 "Thanks for the salad bar, Nice Human Girl. If your Human Friend Who Likes Rabbits comes for a visit, make sure she brings us some vegetables. Or apples. Those are good too."

They're getting so big! And, they no longer run and hide from me. They'll actually come and greet me when I approach their pen. Or, it could just be they think I'll have food for them. And man - can those bunnies EAT. They can go through a whole head of lettuce in 30 minutes flat. And chow down a carrot or two for good measure while they're at it.

I keep wanting to get a picture of Sasha (my neighbour Brian's dog), but I usually remember when I'm back inside the house. The guys no longer seem bothered by her staring at them through the french doors. Gandalf in particular seems intrigued by her. He was after all the one who napped with his cousin Finnegan once, and loves the long, lingering looks he shares with Leika, my other neighbour's (the house next to ours) German Sheppard. Leika will sit on their deck, and watch Gandalf. And he'll look through the glass at her... 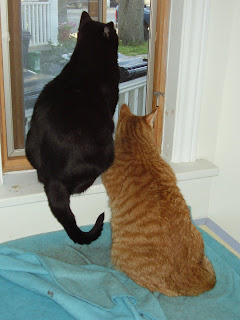 "Yes you do, I've seen you looking at Leika. AND Sasha."

OK, off to get some breakfast. I have to keep my meals regular, and healthy. So what I'd like to have (waffles with oodles of butter and syrup) will probably end up being a blueberry/banana smoothie with probiotics. *sigh*

Labels: Little Dudes, Polycythemia, This and That, WIPs

Bridge- That is alot to have to deal with, but hopefully you will tolerate the meds well.

For myself, I will be glad to see the back of 2010- but maybe things will get better.

Love to all the dudes, big ears and small.

Love your pet menagerie! I'm sure they will take good care of you as you deal with your illness. I'm sorry to hear it's a permanent thing but very glad to know they diagnosed it and can get you on the right stuff. Take care!

I wish you all the strength to deal with your illness. You sound very positive about it! All the best, Brigitte, and I hope the side effects will fade as your body gets used to the medication.

Hey there! Big hugs coming your way from Milton.
I'm sorry you have to take medication...but am hoping that you get used to it and have no side effects.

When did you get bunnies?!?

*BIG HUG* I'm so sorry you have to deal with yet another health issue, but I'm really glad they figured out what it was in time!

You're not a snob, you just know what you like.

Glad they figured out what was going on with you. You make this world a better place. Love you!

That is a lot to take in! I hope the side effects from the meds are minimal. And I'm glad they got it diagnosed before you had a heart attack or stroke.

There must be something in the air with cats and dogs. Kiki has been remarkably tolerant of the dogs lately.

Well, at least you now know what is happening with you health-wise, and it is something they can treat. Taking meds every day does suck, but I always tell myself it's better than the alternative ... :-)

Love the animal pics! I'm glad that the bunnies have decided they like you.

Wow! I am so sorry to hear you have so much on your plate :(
It certainly is a lot to absorb! Try and take solice in your knitting; I find so much comfort and pleasure in it! xoxoxo

*hugs* Hang in there! Lots of kitty snuggles should help. I think you have one or two Little Dudes who might be willing to snuggle... :)

Wow that is A LOT to deal with. But the one positive thing is now you know, and knowledge is power, or so they say.

You definitely deserve some quality time with yarn and what better new project then pretty colorwork. That's my next project, and I can't decide yet whether to make a hat I have a kit for or my Katherine of Argon sweater.

Kitties....take care of your mom. Give her lots of snuggles and kisses. Although don't give her a kiss if you've eaten tuna recently.

Oh, much fun. Not. But at least you have a diagnosis and it sounds like your doc caught it in time to treat it properly. And you do have a lovely catstaff to help you through.

There is nothing wrong with starting and abandoning projects! I need the company.

That is a lot to absorb, but I hope that you are responding to the medications better than expected, and that pretty soon everything will normalize blood-test-wise. I know the kitties are going to take great care of you and won't let you slack off.

I'm glad that knitting is helping you to relax in what must be a big period of adjustment.

Sorry to hear all this that you are going thru. What an ordeal! But you seem to be dealing with it the best you can. AND I agree, your dr sounds great. I like the no nonsense aspect of it.

Glad to see the kitties are doing well.

Sorry to hear about the health issues. I know how hard it is to deal with those but hopefully the meds will really help and you will get lots of kitty love which is the best medicine in my opinion. Hug x